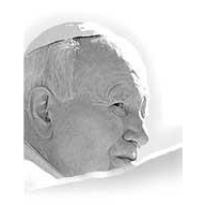 Karol JÃ³zef Wojtyla, known as John Paul II since his October 1978 election to the papacy, was born in Wadowice, a small city 50 kilometres from Cracow, on May 18, 1920. He was the second of two sons born to Karol Wojtyla and Emilia Kaczorowska. His mother died in 1929. His eldest brother Edmund, a doctor, died in 1932 and his father, a non-commissioned army officer died in 1941.

He made his First Holy Communion at age 9 and was confirmed at 18. Upon graduation from Marcin Wadowita high school in Wadowice, he enrolled in Cracow’s Jagiellonian University in 1938 and in a school for drama.

The Nazi occupation forces closed the university in 1939 and young Karol had to work in a quarry 1940-1944 and then in the Solvay chemical factory to earn his living and to avoid being deported to Germany.

In 1942, aware of his call to the priesthood, he began courses in the clandestine seminary of Cracow, run by Cardinal Adam Stefan Sapieha, archbishop of Cracow. At the same time, Karol Wojtyla was one of the pioneers of the ‘Rhapsodic Theatre,’ also clandestine.

After the Second World War, he continued his studies in the major seminary of Cracow, once it had re-opened, and in the faculty of theology of the Jagiellonian University, until his priestly ordination in Cracow on November 1, 1946.

Soon after, Cardinal Sapieha sent him to Rome where he worked under the guidance of the French Dominican, Garrigou-Lagrange. He finished his doctorate in theology in 1948 with a thesis on the topic of faith in the works of St. John of the Cross. At that time, during his vacations, he exercised his pastoral ministry among the Polish immigrants of France, Belgium and Holland.

In 1948 he returned to Poland and was vicar of various parishes in Cracow as well as chaplain for the university students until 1951, when he took up again his studies on philosophy and theology. In 1953 he defended a thesis on ‘evaluation of the possibility of founding a Catholic ethic on the ethical system of Max Scheler’ at Lublin Catholic University. Later he became professor of moral theology and social ethics in the major seminary of Cracow and in the Faculty of Theology of Lublin.

On July 4, 1958, he was appointed Auxiliary Bishop of Cracow by Pope Pius XII, and was consecrated September 28, 1958, in Wawel Cathedral, Cracow, by Archbishop Baziak.

Besides taking part in Vatican Council II with an important contribution to the elaboration of the Constitution Gaudium et spes, Cardinal Wojtyla participated in all the assemblies of the Synod of Bishops.

Since the start of his Pontificate on October 16, 1978, Pope John Paul II completed 102 pastoral visits outside of Italy and 144 within Italy. As Bishop of Rome he visited 301 of the 334 parishes.

John Paul II presided at 143 beatification ceremonies 1, 320 Blesseds proclaimed and 50 canonization ceremonies 476 Saints during his pontificate. He held 9 consistories in which he created 232 1 in pectore cardinals. He also convened six plenary meetings of the College of Cardinals.

No other Pope has encountered so many individuals like John Paul II: more than 17, 119, 200 pilgrims have participated in the General Audiences held on Wednesdays more than 1, 000. Such figure is without counting all other special audiences and religious ceremonies held more than 8 million pilgrims during the Great Jubilee of the Year 2000 alone and the millions of faithful met during pastoral visits made in Italy and throughout the world. It must also be remembered the numerous government personalities encountered during 38 official visits and in the 709 audiences and meetings held with Heads of State, and even the 241 audiences and meetings with Prime Ministers.