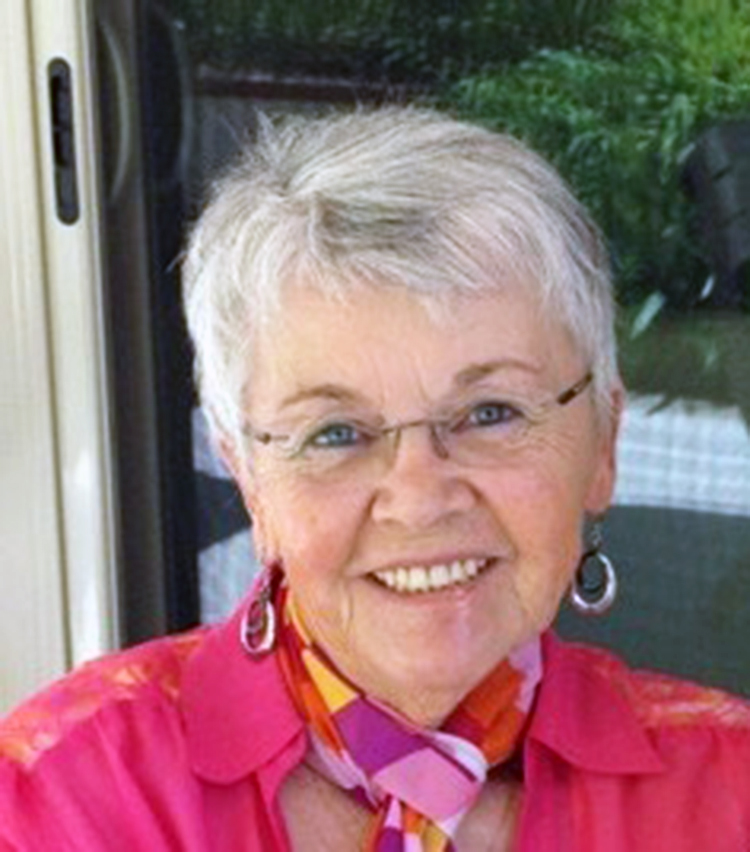 Petrene Ann Kelleher Poss, of San Juan Capistrano, California, died peacefully at home on November 17, 2020. She was 84 and the cause was a recurrence of throat cancer.

Petrene was born on March 27, 1936, in Elkader Iowa, to Harry and Mary (Connor) Kelleher. She was raised in Elkader with her siblings Colleen, Joanne, Harry Jr. (“Kelly”), Catherine, John, Gerry, Dodie, and Judy. The family lived in a second floor walk-up apartment over a funeral home. Petrene attended Catholic school in Elkader, including St. Joseph High School. After high school Petrene became a licensed beautician and for a time she had her own beauty shop in Elkader called Petrene’s Beauty Shop.

In 1959 Petrene was living in Aurora, Illinois, with a brother and sister, when she was set up on a blind date with a guy named Fred Poss. Fred was a native of Aurora and he happened to be home visiting his parents for the holidays. He was told that she was blonde, and she was told that he was tall, dark, and handsome. She, however, had by the time of their date returned from blonde to her natural dark brown hair, and he was almost totally bald. Nevertheless, they hit it off and were married in Elkader, Iowa on February 6, 1960.

After their wedding, Petrene joined Fred in Lynchburg, Virginia, where he had been living and working. Fred’s job soon took them to Chattanooga, Tennessee, where their first daughter, Susan Petrene, was born. After her birth, Petrene became a full-time mom. By 1963 they were living in Freeport, Illinois, a place they called home for almost nine years. While living in Illinois they welcomed their children Kelle Marie, Kathryn Ann, and Steven Michael. As Petrene liked to let everyone know, she had four kids in four and a half years.

In 1971, Fred’s job took the family to Costa Mesa, California. Petrene and Fred loved California and the family lived there for five years, during which time Petrene made many lifelong friends in their neighborhood. In 1976, a job transfer took them to Cheshire, Connecticut, where Petrene again made good friends in the neighborhood. In 1979, Fred got another job transfer and they moved to Fort Worth, Texas. And in 1983, Fred’s job finally took them back to California. They never left. They initially settled in San Clemente for 15 happy years. Then they made a decision to retire to Temecula in 1998, and lived there for another 15 happy years where they enjoyed close friendships and deep bonds with many couples from their neighborhood. In 2018, now a widow, Petrene made the decision to move closer to family. She settled in San Juan Capistrano, the same town where her daughter Kelle lived. Shortly before her move, Petrene was diagnosed with a recurrence of throat cancer.

Those who know Petrene know that her life story had two distinct parts: pre-cancer and post-cancer. In 1998, Petrene was diagnosed with throat and lung cancer and given six months to live. Their move that same year from San Clemente to Temecula afforded an opportunity to consult with a new set of doctors and the late Dr. John Burnett of Kaiser Permanente Zion Medical Center in San Diego suggested a novel approach to treat her cancer, which was a success. Petrene was in full remission from her cancer for over 20 years, and each year for her cancer checkup she baked chocolate chip cookies for her beloved Dr. Burnett.

Petrene’s life changed dramatically during those 20 post-cancer years. Having overcome cancer she had a new lease on life. She became fearless and took on new challenges that once seemed unfathomable. The first thing she did was to overcome her fear of water by taking swim lessons. But in true Petrene form, not only did she learn to swim but she continued taking swim lessons for many years, forming a deep bond and friendship with her swim teacher, Casie Shore. Next, Petrene decided to tackle her phobia of technology. Realizing that the telephone was no longer sufficient to keep in contact with her children, grandchildren, and friends, Petrene told Fred, who was by then an avid user of technology, that she needed her own computer. Further, she said that she wanted to learn how to use it from someone other than him. As she said at the time, if Fred was to be her computer teacher it would be a quick road to divorce. So she took lessons at the Temecula Library and became email and Google proficient. A couple of years later her life took off in a wonderfully different way when she got a Facebook account. A born communicator and an exceptional Irish wit, Petrene became a Facebook legend to her many Facebook friends. Around the same time, she got an iPhone and became proficient at texting and using Facebook on her phone. Petrene’s final frontier of personal development came when she decided to pursue an interest in quilting. She took lessons at the Temecula Quilt Company, started attending weekly classes, and became a prolific and gifted quilter. It was a perfect creative outlet for her and she truly loved to quilt. Petrene’s bond with her Monday morning quilting group was strong and they became dear friends. She used to say that going to quilting was better than going to therapy. There is not one of her Facebook friends out there who didn’t look forward to her first post of each week, which would always read: “It’s Quilting Monday!”

Petrene and Fred were happily married for 57 years. They were true partners in life, as different from each other as two people could be, but devoted in their love for each other and for their family. Petrene blossomed as a grandmother. From 1988 to 1998 she and Fred were blessed with twelve grandchildren: six boys and six girls. She would call them her perfect dozen. She had a gift for making each of them feel special and for developing a relationship with each of them, from their childhood years to their adult years. Each of them knows that they are her favorite. Toward the end of her life she was blessed with two great-grandchildren and she doted on them as well.

It’s difficult to capture the essence of Petrene, even in this long obituary. She was a people person and she was very funny. She was magnetic. Her friends were both young and old, and they all adored her. It would not be unusual to call Petrene on the phone, only to find out she was having lunch with her twenty-something hairdresser, Ali Armijo Nelson, which she did regularly. She was also a fashion icon and she had a scarf to match every outfit and for every occasion. She loved to shop and she loved creating a bargain with all her coupons and discounts. Macy’s was her favorite store. She used to post on Facebook that she was “going to work,” when all she meant was she was going shopping at Macy’s. But some people actually thought she had a job there, which she certainly could have, as all the salespeople at Macy’s knew her by name. Her sense of humor was renowned. Her brother Kelly used to call her “the queen of the one liners.” When she realized she was living longer than her doctors expected, when she would visit her internist for her annual appointment she would say to him as he walked through the door, “Don’t always look so surprised to see me.” Or when she would take Fred to her favorite haunt Dairy Queen, she’d give an aside to whoever was behind the counter: “Act like you don’t know me.”

Petrene’s experience with cancer made her empathetic to others likewise struggling with the disease. Over the years she befriended, connected with, and lovingly coached many people who were going through cancer treatment. She honestly counseled her “cancer friends” about the realities of the disease and its aftermath. She inspired them to share her great will to live and refusal to give up. Her passion was contagious. As a devout Catholic, she also shared with many of them her great devotion to the patron saint of cancer, St. Peregrine. There are too many of her cancer friends to name, but if you’re one of them reading this, you know who you are.

During Petrene’s final eleven months of her life she was lovingly cared for at home by her daughter Kelle. Kelle moved in last December and was Petrene’s round-the-clock caregiver, becoming skilled in caring for Petrene’s tracheostomy, feeding tube, and all her needs as only a loving daughter can. When the pandemic started, Petrene and Kelle permanently quarantined so they could both avoid Covid. Without Kelle, Petrene would have lived out her last months in a skilled nursing home, and had she done so, because of the pandemic no family would have been able to visit. It’s impossible to put into words how much this sacrifice has meant to the rest of the family, who could still visit from a safe distance throughout Petrene’s final illness. In addition, the assistance of Petrene’s Kaiser medical team and hospice care is greatly appreciated by the family.

In addition to Fred who died in 2017, Petrene was preceded in death by her parents and siblings. She is survived by her four children: Sue Harrison (Brad), Kelle Reckinger (Bob), Kathy Kidd (Don), and Steve (Amy), as well as her grandchildren Peter, John, Nick, Emily, Lauren, Mary, Erin, Connor, Brian, Sarah, Annie, and Jack, their spouses/partners, two great-grandchildren Windsor and Arthur, and many beloved nieces and nephews. Due to health concerns surrounding the pandemic, there will not be an immediate service. When it’s safe to travel the family will gather in Elkader for a funeral and burial. To honor Petrene in the meantime, the family asks that you keep her in your prayers, and that you perform an act of kindness for someone else.

Petrene called all of us her favorite. But the best kept secret, which is no secret at all, is that she was ours.