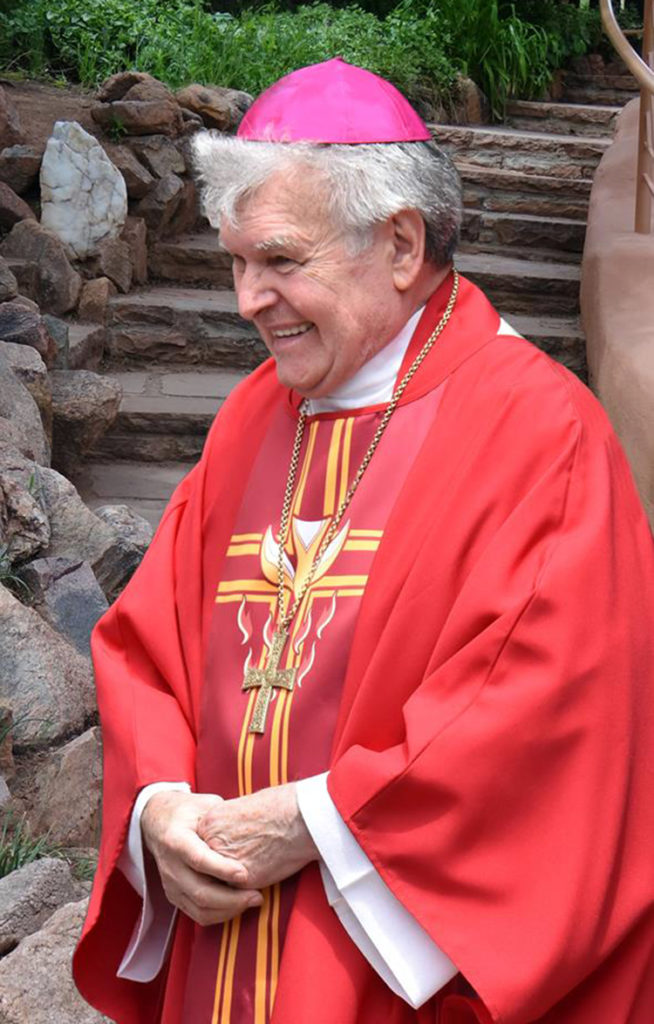 At 7:30 am on August 10th, in California, the Bishop Emeritus Mons. Peter Esterka, a native of DolnÃ­ Bojanovice, entered into eternity.

Bishop and doctor of theology, Peter Esterka, Auxiliary Bishop (Emeritus) of Brno, Titular Bishop of Cefala, and Bishop for Czech Catholics in Diaspora, died in California on August 10 2021. After the last farewell in the Christ Cathedral of Orange County, in the midst of his community of Czech compatriots in the USA, for which he cared for many years as a priest and later as a bishop as part of the Czech Catholic Mission, his body will be transported to the Czech Republic. A mass will be celebrated in Brno in the Cathedral of Saints Peter and Paul and also in his birthplace of DolnÃ­ Bojanovice. He will be buried in his hometown cemetery.

Petr Esterka was born on November 14, 1935, in DolnÃ­ Bojanovice (u. HodonÃ­n). He was persecuted as a student for religious-political beliefs and after many difficulties he graduated only in 1956. On 15 June 1957 he escaped to Austria and stayed for three months in a refugee camp in Glassenbach near Salzburg.

In September 1957 he was admitted to the Pontifical College of Nepomucenum in Rome, and after studying philosophy and theology at the Lateran University, he was ordained to the priesthood in St. Peter’s Basilica on March 9, 1963. Cardinal Traglia was the ordaining Bishop. After obtaining a theology licentiate in June 1963, he was sent among his compatriots in the Archdiocese of San Antonio, Texas.

In 1966 he returned to Rome, where he began preparing for his doctoral thesis “The Unionistic Congresses at Velehrad”, which he defended a year later. After returning to the US in the summer of 1967, he began his academic career at the University of St Catherine in Saint Paul, Minnesota, where he was appointed full professor in 1980. All the while he helped in the spiritual administration of a number of local parishes.

He became a naturalized citizen of the US in 1968, and joined the Air Force Reserves in 1974 as a military chaplain, retiring after 21 years with the rank of Lieutenant Colonel. He was based in Minneapolis, with the 934th Tactical Airlift Group until 1995.

In 1978, Fr. Peter Esterka began to devote himself more intensively to work among Czech Catholics in the USA and Canada. In 1986, bishop Jaroslav Å karvada, who worked in Rome and cared for our compatriots abroad, appointed him vicar for the USA and Canada. In 1994, its operation extended to Australia. In 1987 he was awarded the title of Monsignor and in 1992 he was appointed honorary prelate. He moved to take over the California missions and lived and served in parishes in Fullerton (St Mary’s) and Orange (St Norbert’s) until he was able to buy a property as a physical center for the already established Czech Mission.

On 5 July 1999, Pope John Paul II appointed Peter Esterka as auxiliary bishop of Brno and titular bishop of Cefala and entrusted him with a mandate for the spiritual care for Czech Catholics abroad. His motto for his episcopal ordination on September 11, 1999, was “Go into the whole world to preach the gospel.” In 2013, he won the Gratias agit award, given in Prague, for helping to spread the good name of the Czech Republic abroad. Having turned 75, Bishop Peter Esterka submitted his resignation in 2010 and on December 9, 2013, it was accepted by Pope Francis. He continued to do what he could until his replacement for leadership of the Czech Catholic community in California arrived in 2018.

This extraordinary man, having served people on three continents, was known for a personal form of ministry that drew people to him. Many have reported that they think of him as a member of their families, son, father, uncle, brother. He is survived by his family living in the Czech Republic, his sister Anezka Hromkova and brother Frantisek Esterka, one niece, five nephews and several great nieces and nephews, as well as one niece Jitka Vaitla who lives in Virginia with her husband Vasu Vaitla and twin sons.  Bishop Peter will be remembered by all those whose lives he has touched.