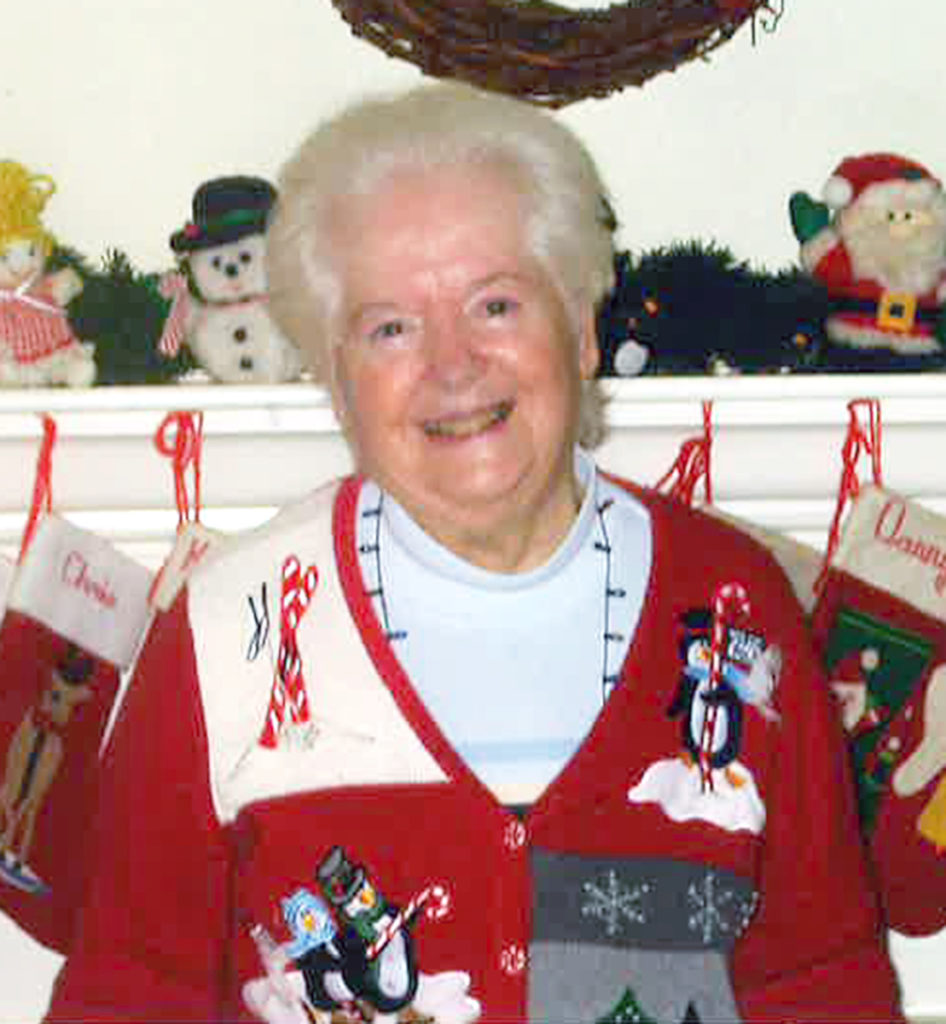 Peggy was born to Charles and Anna Beck February 13, 1921 along with her twin sister Nancy. Peggy was the second of seven children and grew up in Cliffside Park, NJ. Her siblings were William (Lee) Beck, Nancy (Bob) Neumann, Mary (Warren) Carnel, Helene (George) Olsen, Patricia (Michael) Corr, and Louise (Stan) Shaw. Soon after marrying the love of her life, Oscar Boos, she and Oscar moved to Bergenfield, NJ where they spent over 20 years and raised their two older children, Bob and Maureen. Subsequently Peggy, Oscar, and their two youngest children, Bill and Jim, moved to East Lyme, CT. Peggy spent the last 11 years of her life living in California near her daughter Maureen and granddaughter Kathleen and their families. She died peacefully in her sleep on January 26, 2018, less than three weeks before her 97th birthday. Peggy was predeceased by her loving husband of 55 years, Oscar, her sons William “Bill” and James “Jim,” (Lynn) and her son-in-law Daniel Fitzpatrick. She outlived all her siblings except for her dear sister, Pat Corr, of Teaneck, NJ. Additionally, she is survived by her son, Robert (Teresa) Boos of Fountain Hills, AZ and her daughter Maureen (Daniel) Fitzpatrick of San Clemente, CA. She had seven grandchildren: Bob’s two children, Richard Boos and Patty (David) Towers; Maureen’s three children, Kathleen (Chris) Cosby, Dan (Kim) Fitzpatrick, and Kelly Ann Fitzpatrick; and Bill’s two children, Chelsea (Jesse) Leopold and Kaili (Natalie) Boos. She also had thirteen great-grandchildren: Bryan, Joshua, and Kayla Cosby; Michael, Lauren, Nathan, William, and Daniel Fitzpatrick; Annie, Matthew, and David Towers; and Porter and Mason Leopold. She also had numerous nieces and nephews.

Her loving hands were always busy helping others, even as a child. Her sisters told stories about how much she cared for her siblings and her parents. If there was a chore or job to do, she would jump in and eagerly help. She loved to cook and bless others with delicious meals and goodies for her family and friends or in service to others. Peggy and Oscar loved to entertain and were the most gracious, hospitable, and fun hosts. Her busy hands crocheted literally hundreds of afghans for loved ones and perfect strangers too” for new babies, wedding gifts, comfort for the sick, and families in need. Her heart was set on making others happy. She was grateful and joyful right up to the day she died. She had a deep faith and exemplified a life dedicated to Jesus. She loved everyone and was extremely kind hearted and compassionate. She had an uncanny knack for looking at the bright side of any challenging situation. With her smile and soft, gentle touch she ministered to many people.

While living in Bergenfield, she was a Cub Scout Den Mother and a busy parent volunteer at Lincoln Elementary School. In East Lyme, Peggy was a very active member of the Women’s Club of St. Matthias Catholic Church. She was also a 25-year volunteer at Lawrence and Memorial Hospital in New London” helping care for patients, especially newborns. Additionally, she worked as a health aide at East Lyme Middle School.

She received a blessing by a priest, followed by a brief service in California while at O’Connor Mortuary in Laguna Hills. Her funeral Mass will be held on Saturday, June 9 at 11:00 in East Lyme, CT at St. Matthias Catholic Church. She will be buried in East Lyme Cemetery where she will join her husband Oscar. Her Connecticut funeral arrangements are being coordinated by Neilan & Sons Funeral Home in Niantic, CT.

1 responses to Peggy B. Boos