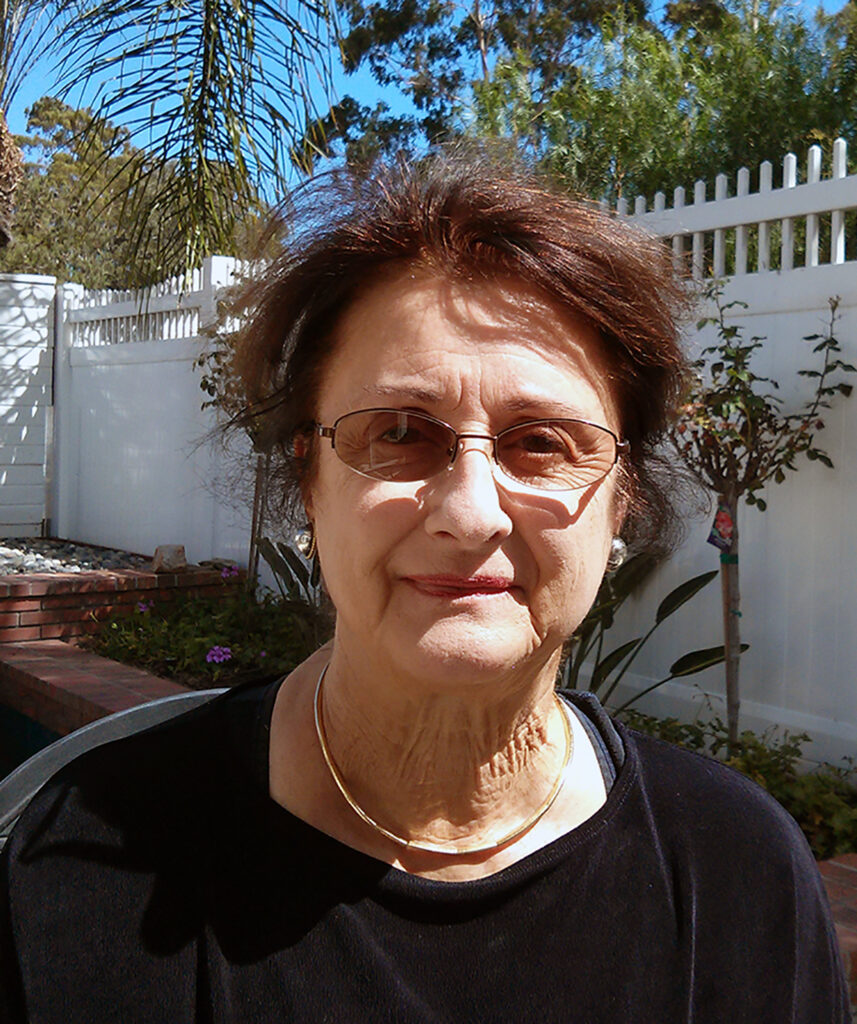 Pauline Markas died peacefully in hospital, in Laguna Beach, California on July 31st, 2022. She was predeceased by her husband, Stephen (2012) after 47 years of marriage.

She is survived by her two sons: Michael S. Markas M.D.(Miranda) and Stephen Matthew Markas, and two grandchildren: Joselyn and Justin. Also her nephew, Steve Powell (Debbie) and his twin sons, Michael and Sam.

Pauline was born on September 7th, 1940 in San Jose, CA to Sam and Helen Lymberis, and was one of 3 siblings: Milly Powell (d. 2014), Nick Lymberis (Barbara). Her father was one of the founders of St. Nicholas Church in San Jose, California and was instrumental in the choosing of the St. Nicholas church name. Her uncle, Arthur Reppas, was St. Nick’s cantor for many years until his passing.

Pauline attended Willow Glen Elementary School, Edwin Markham Junior High, and Willow Glen High School. After high school graduation, she attended San Jose State University, where she graduated with a BA and a California Teacher’s Credential and affiliated with Kappa Delta Sorority. She taught at Samuel Ayer High school after her college education. She married Steve and they moved to Menlo Park, where he commuted to SF, where he was employed by Chevron Corporation, and she commuted to Milpitas, for her teaching assignment. However, after 4 years, they moved to San Mateo, California, where their 2 sons were born, and lived there for 35 years. She was a member of the Greek Orthodox Church of the Holy Cross during those years and a member of their Philoptochos. She also was active with the San Mateo Peninsula Alumnae Kappa Delta chapter for the same number of years. When her youngest was in 1st grade, Pauline began working at Hillsdale HS as a substitute teacher and library assistant and worked there for 10 years until she became the Librarian at Junipero Serra High School in 1992. During her tenure at JSHS she worked with Fr. John L. Zoph, for whom the library was later named, and she upgraded the library at a time when major changes were happening in school libraries and in libraries everywhere….it was the time of internet access, and online catalog and available online databases, all of which she implemented at the request of the administration. She also was able to teach library skills to all incoming freshmen during her 12 years there.

In 2004 she and Steve moved to Ellicott City, Maryland to be nearer her eldest son and family.

This move to the East Coast expedited a lifelong dream of theirs to build a home in Crete on Steve’s paternal land. The travel time to Crete was shortened because the air flights were only 10 hours from the East Coast and so they made several trips to Crete and, with the invaluable help of their son, Stephen Matthew, they built a beautiful home in Crete with a lovely view of the Sea of Crete from almost every room. She and Steve spent 3 months every summer there until his death, and subsequently Pauline spent her remaining summers there. She looked forward to her summers there as she had acquired an entire clan of Marakas relatives, who enhanced her life and enriched her summers because she was in their close knit circle. She considered the building of that home in Crete as one the family’s proudest achievements (aside from the family they produced), because it enlarged her horizon. She loved her summers there.

After her husband’s death, and after spending 10 years in Ellicott City, Maryland, she returned to her beloved state of California, and was so happy to live in SoCal and the city of Laguna Niguel. “Paradise” she often called it. She joined the LNWC and served on the board of that organization; she volunteered at the Laguna Niguel Library Bookstore; joined the LN library book club, and the Red Hat Divas. She was a member of St. Basil’s Greek Orthodox Church, where she was a member of St. B’s Philoptochos; she joined the Cretan Omonia Chapter; and Kappa Delta Alumnae Newport Harbor.

Interment service will be at 12 p.m. on Wednesday August 10th, at Mission City Memorial Park in Santa Clara, California, by Fr. Peter Salmas, where Pauline will be buried alongside her husband. Nearby she will be surrounded by family who predeceased her: They are her parents, Sam and Helen Lymberis, her grandparents, George and Panagoula Reppas, her Uncle Arthur and Aunt Helen Reppas, her cousin George Reppas, and his stepson, David Reppas.