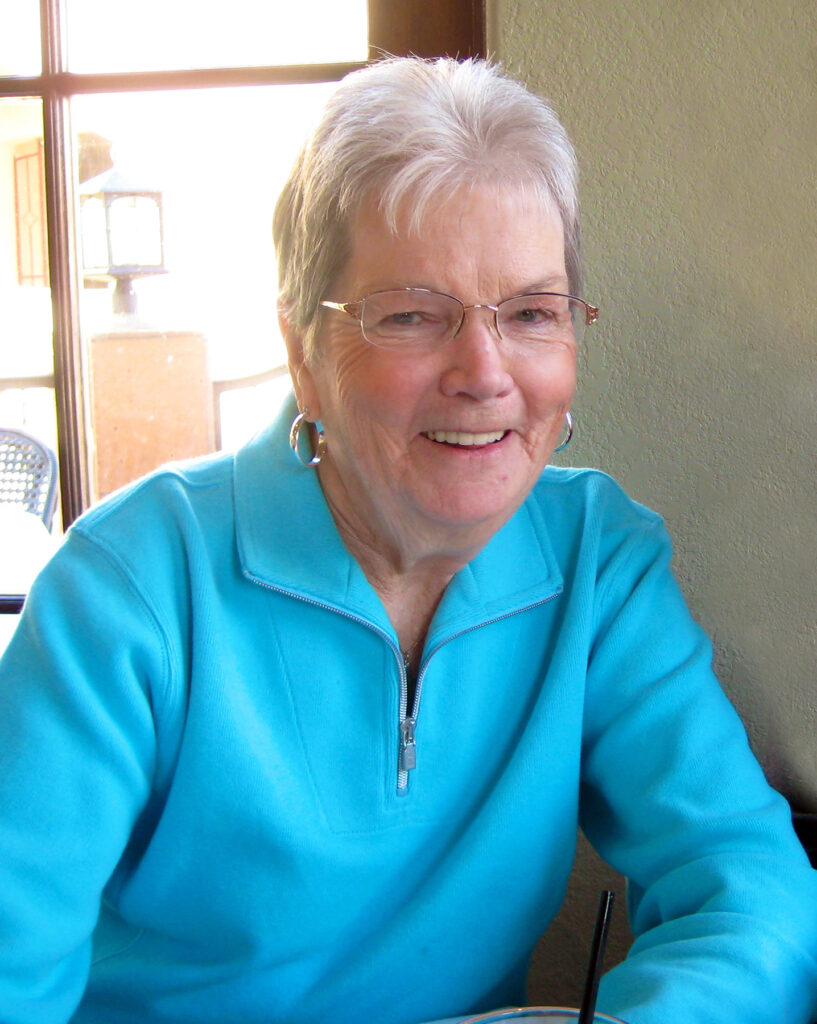 After a wonderful life, Paula Jane Murphy passed away on August 17th in Laguna Niguel. She was ninety-one.

Paula was born to Eleanor Batterberry and Paul Lungren on December 1st, 1930, in Estherville, Iowa. She joined two older sisters Mary and Beth and grew up on a farm. She graduated from Estherville high school where she honed her flair for the dramatic as a member of the theater club, and her lifelong love of politics as a member of the student council.

She graduated from Briar Cliff University in Sioux City, Iowa and, after earning a teaching credential from the University of Colorado returned to Sioux City to teach first grade.

Paula settled into a highly active life where she had many friends, was engaged in the church, and was a member of the Junior League. She loved sports of all kinds, and for a time appeared on a local TV show that encouraged children to read.

She loved to read herself, was curious by nature, kept deeply informed on  current events, and was an enormously proud democrat. In fact, when her health started to fail her a few years ago, we became worried. Then the 2016 presidential election happened, and instantly we all knew she was good for at least another four years. There was zero chance that she was going to die with Donald J. Trump in the White House!

She was known to craft a poem every now and again, and loved to sing, especially around St. Patrick’s Day! And she was funny. She once showed up at the airport to greet her very conservative husband on their 25th wedding anniversary in her Wedding dress. He had forgotten about it and much to his horror, there she was chasing him around the terminal in a pair of running shoes to remind him! There was always laughter and love in any room that she was in.

Above all, Paula’s family meant everything to her. Shortly after starting her teaching career, she met Leo Murphy. They married in 1954, had six children – all boys and eventually settled in Newport Beach, California. She was a wonderful, loving, and supportive wife to her husband of 55 years, and an incredible Mom and Grandma. In turn, we all thought the world of her!

However, Paula did not save her kindness just for her family, but to anyone she met. She loved to talk and could strike up a conversation with anyone. In fact, when in full flight, she had the miraculous ability of sometimes holding a conversation all by herself. You just had to listen. But in the end her actions, and the way she treated others, is what spoke loudest for her. She is best known for always placing the interest of others ahead of herself. Her greatest gift was her generosity of spirit, and she had a real knack for reaching out to and lifting those around her. There are a countless number of us who have been touched by her helping hand. She was able to instill these values in her children and grandchildren and this notion of service and genuinely caring for others without expecting anything in return is her enduring legacy.

We write this in loving memory of an exceptional life well lived. Paula is survived by her six sons, Patrick (Lee Ann), Michael (Cynthia), Daniel, Thomas (Lynne), James (Barbara) and John (Tamra), sixteen grandchildren and seven great grandchildren (with one on the way).

A celebration of her life will be held on September 23rd at 10:00 am at San Francisco Solano Catholic Church in Rancho Santa Margarita.