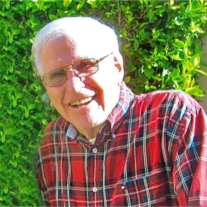 Paul Winfred Pedigo was born on July 21, 1937 at Fort Warren in Cheyenne, Wyoming, moving to Inglewood, California when he was two years old. He slipped away peacefully into the arms of his Lord on October 25, 2017 after a long journey with Alzheimer’s disease.

He attended Inglewood High School where he played football and was Student Body President. He went on to El Camino Junior College where he was a Junior College All American in football. At UCLA he received a Bachelor’s Degree in Physical Education. Following graduation, he attended Officer Candidate School in Newport, Rhode Island earning the rank of Lieutenant in the U.S. Navy. He served in the Philippines for 18 months and then on the Hornet and Kearsage aircraft carriers for 18 months.

After his discharge, he returned to UCLA to pursue a Master’s Degree. Paul was a teacher for 33 years. He taught math at Loyola High School in Los Angeles, and after moving to Huntington Beach, taught and coached football at Estancia High School. In 1971, he married Barbara Bebb Miller, and they moved to Mission Viejo where he taught science and coached football at all four of the Saddleback Valley high schools. At Trabuco Hills High School, he was an assistant track coach for the head coach, his son Steve.

He leaves behind his wife, Barbara; sons Bill (Camille) and Steve (Lisa); brother Bill (Mary); grandchildren Stephanie, Grant, Kayla and Kourtney; and niece Elaine. He was preceded in death by his son Douglas, his sister Verda Mae and his oldest brighter, Jack.

The words of his son, Steve, capture what Paul meant to his family and friends – “He was a great example of what a real man should be. He was strong, courageous, humble, giving, fiercely loyal and cared about others. He was a great teacher, a great coach, a loving father and a devoted husband.”

A celebration of Paul’s life will be held at 11:00 a.m. on Saturday, November 11, 2017, at Presbyterian Church of the Master in Mission Viejo.