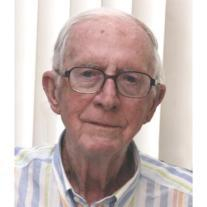 Paul was born and raised in Saint John, New Brunswick, Canada. He served with the Royal Canadian Navy in the North Atlantic during WWII. In 1946, he joined the Ford Motor Company. He enjoyed a distinguished career with Ford in both Canada and the United States, spending many years travelling worldwide with the Overseas Tractor Division. He retired in 1981, and in 1991 Paul and Kay moved from Michigan to Laguna Woods, where they enjoyed a full and active life with a wide circle of friends. Paul especially enjoyed his frequent games of golf and bridge. Fondly nicknamed “The General” by his children, Paul will be remembered by all as a man of strong principles, impeccable integrity, an unshakeable faith in God, great humor and kindness. His enduring and deep love for Kay will remain the hallmark of his life. Paul was for his family and for others, a model of intense commitment to his faith, his family and his friends.

Cremation will be followed by a Mass of Christian Burial at Corpus Christi Church, 27231 Aliso Viejo Parkway, Aliso Viejo, CA on Thursday, March 22, 2012 at 4:00pm with entombment to follow at Ascension Cemetery, 24754 Trabuco Road, Lake Forest, CA. In lieu of flowers, please consider a donation in Paul’s name to the Corpus Christi Church Building Fund.