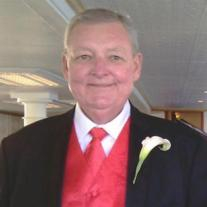 Paul Nestor considered himself a lucky man. He would often say, “I love my life, I love my wife, I love my children, I love my job.” He was born in 1945 in Jersey City, New Jersey to a loving Irish Catholic family. Paul was the middle child with 4 siblings: Thomas, Mary, Edith and John.

Paul met the love of his life, Sharon, at the age of 15 while working as a soda jerk in an ice cream parlor. After a decade he finally married the love of his life on January 27, 1973. Paul worked to put himself through St. Peter’s Prep and St. Peter’s College. He participated in the PLC program in college and received a deferment from the military to attend Fordham Law School on a scholarship. After graduating Paul went on active duty with the Marine Corps serving as a prosecutor and became the youngest military judge at the time he was appointed. It was at this time he met many of his life-long friends and still met with them weekly in their “Thursday afternoon club.”

In 1973 he changed from active duty to reserve status and accepted a position as an associate with Phillips, Naughton, Meunch, and Proctor that later evolved into Phillips and Nestor. In the late 1980’s he transitioned into a sole practice in Mission Viejo so he could spend time with his family; the most important thing to him. Paul practiced law in the Orange County area for close to forty years and was Managing Attorney for the Corona Division of Clasen, Raffalow and Rhoads for the past thirteen years.

Paul never missed a play or a parent-teacher conference. His first coaching experience started with his own son’s T-ball team. Paul was the president of the Mission Viejo Youth Basketball League and coached Thomas’ team for multiple years. He also loved being the announcer for his daughter Bridget’s High school basketball team and helped with her marching band endeavors. Paul was always involved in community service volunteering with the Mission Viejo Activities Committee, the ELKS, and the Optimist Club. Paul volunteered to be Santa clause and brought joyful holiday tidings for many years to the children and families of Mission Viejo. Paul helped to organize the St. Patrick’s Day parade and his children participated as leprechauns. He was the heart and soul the Beer booth at Lake Mission Viejo Street Fair every 4th of July for many years. Paul was always a source of constant support and love. Paul was our rock. He passed away in his sleep on May 14, 2012. We will miss him.