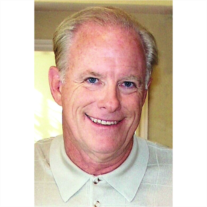 Once upon a time, a tall “SoCal” boy stood behind a girl in a university book store line and saw her drop her checkbook. He picked it up and returned it to her, and the rest, as they say, is history.

Paul was completing a fifth year at Stanford University, working toward a Master’s in Mechanical Engineering. His wife-to-be was a fair-skinned Midwesterner from Chicago, a freshman pursuing a Slavic Studies degree. When she looked up at the sun-bronzed, blue-eyed, golden-haired man who held her finances in his hands, she was smitten.

In spite of different temperaments–one more analytical, the other more artistic– they found balance in their relationship. Among many mutual interests was a fondness for calves liver and onions–surely a sign that they were destined to be complementary partners in life and best friends forever.

Throughout a fifty-year marriage, Paul and Bonnie raised two daughters, Gretchen and Adrienne, finding fulfillment in daily life. Well-groomed yards, cherished pets, venerable family heirlooms and a growing collection of art enhanced their homes. They were active in community organizations and sought adventure in independent travel around the globe.

Viewing Paul’s life in retrospect, his family wishes to share some personal reflections on things he loved, and things we loved about him.

Paul really liked the color yellow. His first car was a yellow GTO, the family dog Magnum was a yellow Labrador and yellow roses reminded him of his mother. He adored sweets, particularly dark chocolate and crisp “burnt” cookies. Batches of blackened cookies (baked so often by design) were frequently found in his curbside mailbox. He could decimate three-quarters of a pie or engulf half an apple with one bite. This propensity turned the women of the household into “hoarders” who jealously guarded their fair share.

Paul was a doting father who held high expectations. Although not a great volunteer, he willingly participated in the Y’s Indian Princess program for fathers and grammar-school-aged daughters. Big Buck, Little Deer and Little Doe spent happy hours making crafts, carrying out service projects and eating refreshments. During his girls’ high school years, he came directly from work to cheer them on at their athletic events. He admired their tenacious pursuit of their undergraduate and graduate degrees, and took great pride in subsequent advancement in their careers. He also relished the “man talk” that came his way from sons-in-law Paul Klokinis and Galand Thaxton.

Paul was thrilled to become a grandfather and took seriously his role of mentor and wise counselor. He had a calm, analytical way of approaching problems, a trait valued highly by Sophia, Aidan and Ethan. During his illness, all three children showed him much compassion and love.

Paul had a passion for sports. In high school, he surfed (think Beach Boys), and played golf and basketball. He began fitness training in college, and continued to work out in a gym almost all his life. He and Bonnie took up tennis five years into their marriage and remained (for the most part) compatible doubles partners for over forty years. Paul’s left-handed serve often gave them a competitive edge. He will forever remain in the eyes of his spouse the fastest, most accurate, play-by-play analyst and commentator for football and basketball. His grandson Ethan evidences many of Paul’s athletic gifts.

Paul had great rhythm, a trait passed down to grandson Aidan! As a young boy, he wanted to take up drums, but his parents strategically steered him to classical guitar. He loved to dance, whether swing, waltz or line-dance. His Theta Delta Chi frat nickname was “The Bopper!”

Paul loved sports cars, although his 6’4″ frame limited his selection. In addition to his GTO “muscle car,” he owned three different Porsches, the last of which, a deep green Carrera cabriolet, was a well-deserved retirement gift.

Paul appreciated live theatre, including opera (to the surprise of his mother). Our family enjoyed annual season tickets to the Broadway Musical series at La Mirada Theatre. His granddaughter Sophia apparently inherited his gene-she participates in apprentice programs at the Denver Performing Arts Center. Gretchen and Adrienne continue to enjoy season tickets to live theatre-an ongoing gift from their father and mother.

Paul also loved movies-his favorite film was The Quiet Man. Several years ago, Bonnie saw to it that he visited the original Irish village of Cong north of Galway where the movie was shot. Speaking of movies, Paul often was told he looked like actors Doug McLure and Clint Eastwood!

Now, here are a few things we love about Paul:

Paul saw God clearly in the natural world around him. He had an enduring appreciation for his family’s home at Lake Tahoe, finding rejuvenation in the dark green pines and deep blue lake waters. He also loved the Pacific. He and Bonnie took their girls tent- camping annually at Refugio and El Capitan beaches-another “mutual” interest fostered by Paul’s involvement in Boy Scouts and Bonnie’s in Camp Fire Girls. Paul taught his girls to respect the ocean, and to “leave every campsite cleaner than when it was found.”

The rule for his garage shop was: “A place for everything, and everything in its place” -often ignored by his little girls playing “hardware store” on weekends. The family also was instructed to “Plan your work and work your plan.” He insisted on beginning even the simplest projects in an orderly manner: measuring, marking, double-checking.

Paul was a man of integrity who believed in square dealings in business and in his personal life. His responsibilities at Southern California Edison involved him in challenging work, such as testifying before the Nuclear Regulatory Agency and working to promote the development of spent fuel storage at Yucca Mountain Federal Waste Repository. He used to say that mistakes were not an option. He was known as a man of few words-he didn’t need many to put his point across.

In these last few years, as Paul lost physical strength due to his disease, he once again took up the game of bridge, enjoying the mental challenge. We are grateful for the camaraderie found around the bridge table at South County Bridge Club.

Paul will be missed by a close circle of dear friends, and first cousins Bryant, Greg, Wayland and Linda; brothers in-law Ken, Anten, and Phil, their spouses Kathy, Fran and Kim; and sister-in-law Sharon.

Gretchen, Adrienne and I have been privileged to go through life by his side. Each of us has been enriched by his strength of character and his devotion to our well-being.

A private Celebration of Life will be held in Laguna Niguel in October. In lieu of flowers, donations may be made to Parkinson’s Association of Orange County (https://paocinc.org), “In memory of Paul Myers, Tremble Clefs”; or the National Parkinson’s Foundation (www.parkinson.org.)