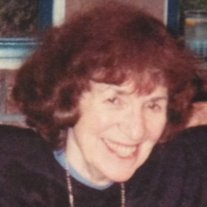 Patricia Devine, widow of George Devine, resident of the Village for sixteen years, passed away April 25, 2013.

She was an active member of Saint Nicholas Catholic Church, The Catholic Women’s Group, and the L.W.V. Garden Club. She enjoyed walking along the creek and being a friend to all.

Memorial services will be held Monday, May 6, 2013 at 9:00 AM at Saint Nicholas Catholic Church, Laguna Woods, California.