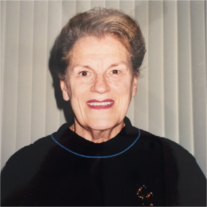 Patricia Poska, of Laguna Woods, passed away after a long, courageous fight with cancer on January 12, 2017. She was born on April 1, 1934, and raised in Chicago by her parents Bruno and Viola Korba. She lived there until 1994 when she moved to California to be closer to her son and grandchildren.

As a child growing up during WW II, she spent many days at the field house at Eckert Park in Chicago and playing with her dog Dusty and her sister Joan. In the early 1950’s she got married, had a child and later got divorced. She raised her son as a single mom while living with her mother as her Father passed away in 1946.

Even though she struggled financially, she made sure her son went to YMCA Summer Camp and Catholic schools where he got a great education in life 101. Her long-time companion, Gene Foman, traveled with her extensively throughout the US. Those car rides were some of the best times of her life.

Her life-long passions were the arts, learning new languages, classical music and reading about countries all over the world. She particularly enjoyed the music of Michael Sellers.

In later years, she was devoted grandmother to her three grandsons, Alex, Ryan and Matthew, providing encouragement, a few dollars here and there, and support for all of their many activities. She also talked to them about etiquette, manners and to “speak right up”.

Those who knew her well understood she could be could be tough, opinionated and very direct. But underneath that was a strong love and loyalty to those she held dear.

Her spirit lives on in those who survive her. Her son, Fred, her daughter-in-law Kimberly and grandson Matthew, her grandsons Alex and Ryan and their mother and friend Glenna, her niece Kelly, members of the Kubistal and May families and her many friends all over the country.

Donations can be made in her honor at the Susan Komen Foundation or the Salvation Army.