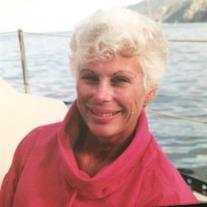 Patricia (Pat) Jane McGinity Carlson peacefully passed away on Tuesday, October 7, 2015, in Brea, CA, one day before her 77th birthday. Pat was born on October 8, 1938, in Santa Monica, CA.

Pat’s childhood was greatly impacted with tragedy. At age 5, she lost her father to cancer; and at age 16, her mother died in an auto accident. These events shaped her character and impacted her life. It was after her mother’s death, at the lowest point in her life, she became determined to have her own career and family. She wanted a husband, kids, and a house. Pat met her future husband, James Carlson in Los Angeles in 1960.

Pat lived her entire life in Southern California and was a graduate of Immaculate Heart High School in Los Angeles. She earned her Bachelor of Science at Mt. Saint Mary’s College. She was a Certified Medical Technician for over 40 years, and worked her entire career in a hospital setting. She concluded her career as a Systems Analyst for UCI Medical Center and then, the City of Hope before retiring.

Pat followed her own path. She was adventurous and had griit. She loved the outdoors and enjoyed skiing, hiking, camping and sailing. Her most challenging sailing trips were excursions to the Caribbean Islands, the Windward Islands, and Grenada. At 40, Pat became a certified scuba diver, which at the time, seemed crazy to her teenage sons; however, she was leading the way for her sons and their friends to become certified scuba divers as well.

Pat also had a love for animals. There were several pets of every variety when her boys were young. She was particularly partial to Labrador Retrievers.

Patricia Jane Carlson is survived by James, her husband of 54 years; her sons Rick (Leilani) Carlson and James Carlson; three grandchildren, Ryan, Jessica and Catalina; and her yellow lab, Kelly.

Please join the family in the reception hall following the service to share memories and celebrate an extraordinary life.

In lieu of flowers, donations can be made in memory of Patricia McGinity Carlson to Guide Dogs of the Desert PO Box 1692, Palm Springs CA 92263 or www.guidedogsofthedesert.org.