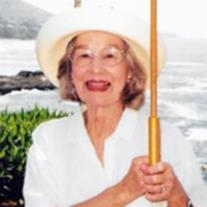 Patricia Ann Hunter Smith was born in San Francisco, California on
February 11, 1924, and passed away in Laguna Woods, California on
December 18, 2013.

Patricia’s life story is fascinating. She grew up in Hollywood and Palm Springs, California and left many writings behind about her life and the many interesting people she knew. Her father, Randolph Fredrick Hunter, was a doctor and her mother was widowed when Patricia was 10 years old. Patricia’s great grandfather was a doctor, too, Bartlett Yancy Harris.

“Patsy” Hunter played the role of the baby in the silent movie “Ramona” with Delores Del Rio, and she was Shirley Temple’s playmate in Palm Springs. A
UCLA graduate, she worked as a publicity scriptwriter for Radio KHJ-LA from 1946 until she went to work for Samuel Goldwyn Studios in 1947 in the Publicity Department. Patricia married Burl Dean Smith in 1948. During their extended honeymoon to Rome and Paris she kept a journal every day. Patricia worked in Europe as the CEO of the Rome Office of the International Refugee Organization and was the personal assistant to the Paris U.S. Ambassador’s Secretary.

When Patricia returned home to the United States with child, she became a public school teacher and the author-illustrator of children’s books (unpublished) and the author of over 40 poems (unpublished), one of which was set to music. Her hobbies were sewing many beautiful formals, dresses, men and women’s suits and coats, costumes, and she created jeweled accessories. In addition to writing, sewing, and knitting she enjoyed snorkeling in Laguna Beach, California.

When Pat and Burl went back to Europe in 1964 with their daughter Cynthia, Patricia taught U.S. History and English to diplomats’ children in Paris. When they returned home Patricia became the President of the Community Opera Association in Riverside, California and the President of her Sorority Alumni Association, Kappa Kappa Gamma. Pat studied to become a real estate broker and opened her own office in Riverside, California – Pat Smith Real Estate.

Patricia and Burl lived happily in Laguna Beach after he retired and they snorkeled together, walked and enjoyed the beautiful seaside community. Patricia loved the ocean. She continued her crafts such as reupholstering furniture, sewing, making jewelry and writing. She was survived by her husband Burl Dean Smith by two months and two days, and is survived by her daughter Cynthia Ann Smith. Patricia was the most loving and gracious person.