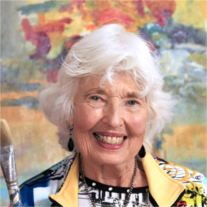 Patricia Ann Rodgers passed into the arms of Jesus on December 19, 2016 at the age of 86 in Mission Viejo, CA. She was born Patricia Ann Lapitz to parents Theodore and Rosalind Lapitz on November 30, 1930 in La Crosse, Wisconsin. She was the first of two children.

She later attended St. Teresa’s College where she met Jack N. Rodgers while he was working at a soda fountain. The couple married in December of 1951 and went on to have 9 children. After living in several states, the couple eventually settled in Southern California where they raised their family in Westminster. Besides being a devoted wife to Jack and loving mother to her children, Pat became a practicing RN which really came in handy when caring for her very active 8 sons and 1 daughter. But her true passion was art, and at the age of 55 she received her Fine Arts degree from Long Beach State University and began a career as an artist. Upon Jack’s retirement the couple moved to Palm Desert where they lived and flourished for 20 years. When Jack passed in 2012, Patricia decided to move to Orange County, California to be closer to children and grandchildren.

It was here, at age 83, that her art career really began to take off. While Pat created many different styles of art throughout her lifetime, her first love became acrylics and she began painting and successfully selling mostly abstracts exclusively through Westervelt Studios in Laguna Niguel, California.

Patricia is survived by 1 daughter, Rebecca; 7 sons, John, Terry, Brian, Steven, Robert, Peter and Joel; 18 grandchildren and 4 great grandchildren. She is predeceased by her son Kevin. She was a loving, caring and creative person who will be greatly missed by all who were blessed to know her.

Services will take place at South Shores Church at 2:00 PM on Saturday, January 7.

In lieu of flowers, donations may be made to:
South Shores Church
32712 Crown Valley Parkway
Monarch Beach, CA 29629
(Memo: Gifts in memory of Pat Rodgers)