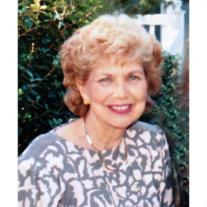 Patricia was preceded in death by her husband of 58 years, Ralph B. Linzmeier Sr., her four sisters and two brothers.

Patricia and Ralph were married March 11, 1950 in Tucson, AZ after a one-month courtship and military transfer orders sent them off to start their family in Honolulu, Hawaii. The two enjoyed the life of a military officer together and continued to raise their children in Falls Church VA, Washington DC, Ruislip, England and Alamogordo NM. Retirement from the military in 1964 led to couple to Ralph’s roots of the central valley in Visalia, CA and eventually to Mission Viejo.

After raising her six children, Patricia went back to college in 1971 at the College of the Sequoias in Visalia, became a registered nurse and enjoyed her work at the Kaweah Delta District Hospital helping deliver the newly born, working in the kidney dialysis department and eventually as a hospice nurse. Patricia’s caring touch and loving approach was enjoyed by all who met her.

Patricia enjoyed quality time with her family and friends, was always open to life’s adventures on a lake, a hike, a cruise, a good game of cards, a poetry reading, studying philosophy, listening to varied music and savoring all the good times that a large family would provide.

A funeral mass celebrating Patricia’s life will be held at San Francisco Solano Catholic Church, 22082 Antonio Parkway, Rancho Santa Margarita, California, Tuesday, April 24 at 3:30 pm. She will be laid to rest and joining her husband Ralph at Riverside National Cemetery on Wednesday at noon.