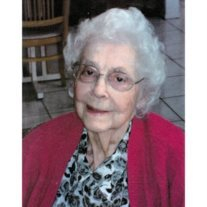 Bolint, Patricia Ann, Dana Point resident of 33 years, died March 2, 2014. Patricia was born April 1, 1925 in Elwood, Indiana. She worked at Nipsco in Gary, Indiana where she met the love of her life, Arthur, in 1947. They were married in June 1948 and moved to southern California in 1951 where she started working for Aerojet. She retired in 1982 and enjoyed her retirement years in Dana Point. She was predeceased by her husband, Arthur, in 2011. She is survived by her daughter, Christine Kanuch; son-in-law, Allen Kanuch; and several nieces and nephews.

Funeral services will be at 10:00 AM, Thursday, March 6, 2014 at Mission Basilica San Juan Capistrano. Interment will be at Ascension Cemetery in Lake Forest following funeral Mass.