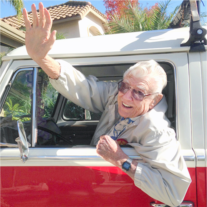 Norwood Caswell Horne was born in the very small North Carolina town of Magnolia. In his teens he worked summers driving trucks along the east coast, setting up pins at a bowling alley, and lifeguarding at Wrightsville Beach, NC. He later attended North Carolina State University for 1 year to play basketball for the Wolfpack.

World War II broke out in September of 1939. Norwood joined the Navy in September of 1941 and was chosen for immediate sea duty, assigned to the Destroyer, Jesse Roper. Three months later, when the U.S. joined the war following the attack on Pearl Harbor, Norwood and his Roper shipmates saw considerable action. The Roper sank a German U-boat off the coast of North Carolina; was hit by a kamikaze plane; picked up survivors of sinking ships; and transported many foreign troops.

While in the service he traveled the world, going to Okinawa, Newfoundland, the Caribbean, the Mediterranean, Europe, the Panama Canal and both US coastlines. He received an honorable discharge in October of 1945 after receiving two battle stars for the European-African-Middle East campaign, one battle star for the American campaign, another battle star for the Asiatic-Pacific campaign and a World War II Victory medal. He loved his time in the Navy and it was a highlight in his life.

In 1946 he began taking flying lessons and in September went to Tulsa, Oklahoma to attend Spartan Aeronautical Engineering School. He loved to fly, so he took flying lessons and logged as many hours as possible. In 1948 he spent some time as a roustabout working in the oil fields, until he was eventually hired in 1949 by United Airlines. He began as a Flight Engineer in New York flying on DC-6 airplanes.

Norwood was a young, eligible bachelor in New York until he met a pretty stewardess named Betty Jean Long. They were married in November of 1950 and the newlyweds enjoyed the clubs in New York featuring the Big Bands and Dixieland Jazz. In 1953 their daughter Betty Louise was born. Norwood, Betty Jean and Betty Louise moved to Southern California in 1955 and shortly after their daughter Carol Ann was born in January of 1956. Six years later, in 1962, their son John Norwood was born. Norwood, a man of many talents, helped build his dream custom home in Costa Mesa in 1965. Norwood and Betty Jean, or BJ as she was known, loved to travel and over their lifetime together they made many trips across country and to more remote destinations like Hawaii, Europe, Mexico, Cuba, Canada, South America, and Japan.

In May of 1981 Norwood retired from United Airlines after 32 years of flying. Norwood and BJ moved to Oceanside in 1984, but Norwood got bored in retirement. To fight the tedium of retirement, Norwood transported RV’s across country and started building four townhouses on his property in Carolina Beach, NC. He and BJ continued to travel across country and occasionally to Europe.

In 2000 Norwood and BJ moved into Freedom Village to help care for BJ who was in the early stages of Alzheimer’s. In December of 2001 Norwood was baptized at Saddleback Church where he worshiped weekly for the next 15 years. Norwood read the Bible from cover to cover four times! On January 3, 2002, Betty Jean passed away. Norwood continued to travel on his own for a while, and later with family. He loved North Carolina and Florida, and was always ready to pack his bag and take a trip anywhere.

Norwood’s favorite Bible verse
Luke 1:37
Nothing is impossible with God.