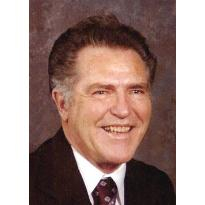 Norman T. McGinnis was born in a sod house on a homestead east of Maurine, South Dakota, August 3, 1919. He was the youngest son of Gideon Melvin McGinnis Mel and Florence Lydia Ellis McGinnis. His family moved to a 160 acre farm and ranch about seventeen miles northeast of Faith, South Dakota, on the Moreau River when he was seven years old. When he went to school he had to cross the river and most of his schoolmates were Sioux Indians as the school was on the Cheyenne Indian Reservation. This school soon closed and Norman attended other small schools through eighth grade. After he finished eighth grade his mother was determined that he go to high school because he had a hernia and they thought that they would never get enough money to have it operated on. She felt that he would need a higher education to make a living. He managed to stay with different folks in Faith until he finished high school.

Norman went to Blackhills State Teachers College in Spearfish, South Dakota. He taught his first years in schools in Zieback County. Later, a man who worked for the Bureau of Indian Affairs recruited him to teach on the Cheyenne Indian Reservation. He married Irene G. Hansen while teaching there. They were married, October 25, 1942, at Dupree, South Dakota. They spent nine years working for the Cheyenne Reservation at Iron Lightning, Cherry Creek, Cheyenne Agency Boarding School and Four Bear. Irene cooked the noon meal for the kids and taught sewing and household duties to the girls.

In September 1943 they went back to Blackhills State Teachers College and continued their education. March of 1944 they took a job at Node School about nine miles east of Lusk and in 1945 they returned to the Indian Service. They had their first baby that year and over the next twenty years they had five more children. Sheryl, Carmen, Greg, Kim, Tim and Wendy.

In 1966, Irene’s sister Bertha died out in California. After they went to her funeral they decided to move to California.

Over the years Norman taught school, worked for Dunn and Brad Street, a Parts Store, Aaron Brothers Art Store and eventually retired at age 67 in March of 1985 from Orange County where he was in charge of micro filming cour t cases. Norman was an avid bowler, a wonderful artist and self taught musician. He really enjoyed his family and friends. Norman passed away just a few days away from his 89th birthday. We will all miss him.