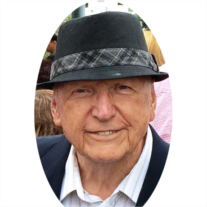 Norman Stanley Stevens was born on June 20, 1929 in Detroit Michigan, and passed on July 28th 2016, after several years of suffering with Dementia. He is survived by his wife Jean, of 65 years, and his children Julie, Robert, Sheila, and his grandson Griffen, granddaughter Angela, and his sister Christine.

Norm was born and raised in Detroit, Michigan, by his parents Stanley & Julia; many of their extended family lived within blocks of each other, having come here from Poland. He joined the Army in 1948, and after basic training in Fort Knox, KY, he was sent to Letterman Army Hospital, in San Francisco; for the remaining three and half years of his enlistment. He was one of the lead Supply Sergeants, and was chosen to play on the Sixth U.S. Army baseball team for two seasons. Norm also met his wife of 65 years while being stationed in San Francisco. He took night classes at San Francisco State while working various jobs, and graduated in 1955.

Norm’s career spanned decades working in the Parks and Recreation Department of San Francisco, Fontana, and as the Director in West Covina. He planned and designed many new parks and created some of the first after-school programs that were duplicated across California. He was appointed as one of the first chairmen of the ASA (Amateur Softball Association) where he continued to develop and grow the program in Southern California.

Norm was an avid reader; reading over 2,000 books in his lifetime. He loved to play baseball and basketball, and played on the LDS basketball team. After retiring, he served a Stake Mission in Murrieta, CA, with his wife Jean, for five years. He and Jean were called to serve at the LDS temple in San Diego for six years, and Norm also served at the Newport Temple for another seven years. He loved his church, and never missed an opportunity to share his faith with any stranger within ears length.

Norm will be remembered by his family and friends, and know we will see him again.