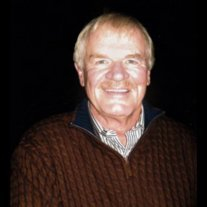 After college, Norm moved to California and settled in the Los Angeles area and took a job as an elementary school teacher. After his brief career in education, Norm utilized his charisma and salesmanship in a position with the Xerox Company in the Santa Barbara area. It was in Santa Barbara Norm met the mother of his two children.

By 1981 Norm began his long term career in real estate starting with Coldwell Banker Commercial. After his tenure in commercial brokerage, Norm formed his own development company in South Orange County, Makena Properties, and developed many successful real estate ventures throughout Southern California. In 2003 Norm combined his passion for sports and real estate in the formation of American Sports Centers in Anaheim.

Norm will be remembered as a proud husband and father; generous friend; honest businessman and entrepreneur; avid golfer at El Niguel Country Club; knowledgeable wine enthusiast and collector; rabid sports fan; successful youth sports coach; enthusiastic joke and storyteller; and most importantly someone who made all around him better for having known him.

In lieu of flowers, the family has asked that blood or donations be made to www.choc.org/Hyundai Cancer Institute. Please include Norm’s name and direct donations to children’s leukemia care. Thank you for all your amazing support!