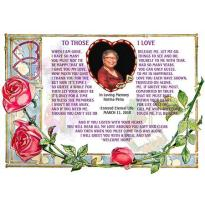 A TRIBUTE TO NORMA P. PENA

Norma was born in Inopacan, Leyte Philippines on August 23, 1942. She was the only child of Filomela Delarmente and Pastor Palacio. Her father died when she was barely 2 years old; a victim of a bomb dropped by the Japanese on the Municipal Building of Inopacan, Leyte, where he was serving as the as Municipal Treasurer. Norma was raised by her mother, grandmother Restituta Delarmente, and grandfather Angel Alosa. Her mother worked as a school teacher.

She vacationed with closed friends to California where she met her husband in 1966. She went back to Canada briefly before she decided to come back to California to get married.

Norma’s contribution as a nurse is considered by most of her peers as something noteworthy and significant. She spent 47 years of her life helping other people heal from their sickness, offering consolation to her patients and families, and comforting those who needed comforting. She was kind, helpful and generous with her friends and peers. Her families learned from the eyes of her co-workers how much they loved her and respected her work ethics. She spent 38 years of her life at St. Joseph Hospital of Orange.

She is survived by Alfonso, her husband of 43 years; her children Leigh Ann, Carlos, Tina; and her grandchildren, Brice, Meighann, and Jordyn Halie.

You’re in God’s hands
So have no fears,
He’s cared for you
Down through the years.
You’re in the prayers
Of those you love,
And God is watching
From above.
Your faith has carried
You thus far,
And God will meet you
Where you are.