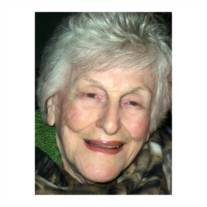 Norma C. Myer, 91 years of age, passed away peacefully on Friday, June 30, 2017 at Laguna Hills Rehabilitation Center in Laguna Hills, CA.
Norma was born July 30, 1925 in Sydney, Australia to the late Dominic and Emily (Hall) Ferrari. Her older sister, Elma (Ferrari) Graham, preceded her in death. Norma worked for the American Army during World War II where she met the love of her life, Charles Myer, an American who was deployed to Australia.
Norma married the late Charles Myer in 1943 in Australia. Their son, Michael Myer, was born in Sydney in 1944. The family moved from Australia to Cleveland, OH and shortly after, their daughter, Sharon (Myer) Graef, was born in 1947. When her beloved Charles passed away in 1970, Norma worked for several years in Cleveland then decided to move out to California in 1977 where she stayed with good friends and went back to school to become a licensed vocation nurse. She worked for the Sepulveda VA hospital as an LVN for 20 years before she retired. Norma began living with her daughter in Lake Forest, CA in 1987 to help care for her two youngest grandchildren. She lived with her daughter for many years until her health prevented her from staying alone. Norma was then moved to Laguna Hills Health and Rehabilitation Center in Laguna Hills, CA in 2009.
Norma loved spending time with her family, especially with her children and grandchildren. She was a loving and caring person, devoted wife, mother, and friend, always thinking of others first. Her kindness knew no boundaries. Norma also loved to read Harlequin romance novels, and especially had a big sweet tooth.
Norma leaves behind her two children, Michael Myer and Sharon (Myer) Graef; her six grandchildren: Kimberly (Myer) Donson, Tammy (Myer) Terifaj, Cindy (Myer) Vickers, Denise (Myer) Hassett, Jennifer (Graef) Lee, and Adam Graef; 8 great grandchildren; 11 great great grandchildren; her nieces and nephews; her cousins; and her friends.
A celebration of life ceremony will be held at O’Connor Mortuary in Laguna Hills, CA on Saturday, July, 22, 2017 at 1pm. Reception to immediately follow. O’Connor Mortuary is located at 25301 Alicia Parkway, Laguna Hills, CA 92653.