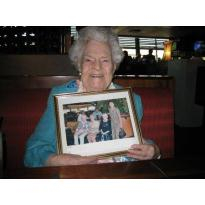 In 1943, Ms. Chapman joined the American Red Cross and enlisted in the Navy Nurse Corps. She continuously served, caring for our brave forces in the Navy and Marine corps and families until 1968 where her final two years of duty were served at Marine Corps Air Station El Toro, California as LCDR.

In retirement Ms. Chapman was a volunteer for the American Red Cross Bloodmobile and for the Braille Institute. She was a participant in the 90+ Study of UC Irvine and donated her brain to their instutute on research for brain aging.