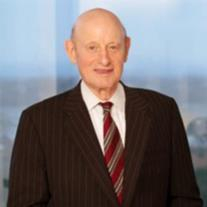 Nick Edward Yocca passed away peacefully at his home Thursday, October 15, 2015, at the age of 85. Nick was the original senior founder of Stradling Yocca Carlson & Rauth.

Born in Windber, Pennsylvania, a small coal-mining town, Nick was the ninth of ten children born to the late Nicola and Assunta Yocca, both immigrants from the Abruzzi region of Italy. Nick earned his B.A. degree from the University of Pittsburgh in 1951, and then honorably served as a Staff Sergeant in the U.S. Army during the Korean War. After his military service, Nick returned to Pennsylvania and worked briefly for a major insurance company headquartered in Harrisburg where he met the late Bonnie Gerrity Yocca, the love of his life.

Shortly after marrying in 1955, Nick and Bonnie relocated to Ann Arbor, Michigan so that Nick could study law at the University of Michigan Law School. There, Nick received his J.D. degree with distinction in 1958, was named a member of the Law Review, was inducted into the Order of the Coif, and, from 1958 to 1959, served as an Instructor. In 1959, Nick and Bonnie moved to Los Angeles where he began his law practice as an Associate with O’Melveny & Myers. Lured by the growth opportunities Nick foresaw in Orange County, Nick and Bonnie and their 4 children moved to Santa Ana in 1964 and Nick joined the law firm of Rutan & Tucker where he rose to become Chairman of the Corporate Department. In 1975, Nick and 3 close colleagues founded Stradling Yocca Carlson & Rauth in Newport Beach, which has grown to more than 125 attorneys in nine offices.

Nick was an icon in the Orange County business and legal community. He was the pre-eminent lawyer for the companies that emerged in the early days of Orange County’s technology boom, representing such pioneering technology companies as AST Research, Silicon Systems, Standard Logic and many others. He is remembered not only as a skilled practitioner but also one who would out think and out work any lawyer on the other side of the table.

Over the course of his career, Nick’s clients ranged from emerging growth businesses to Fortune 500 corporations in a broad range of industries. From 1975 to 1980, Nick had the privilege of serving as the Vice President and General Counsel of Oceaneering International Inc. Nick was also honored to serve as a Director of Microsemi Corporation from 2002 and as the Chairman of its Board until June 30, 2004.

Nick received numerous honors and awards during his career. Notably, he was awarded the Jurisprudence Award by the Anti-Defamation League in 1998 and the Entrepreneur of the Year Award by Ernst & Young in 2006. In 2008, the Association for Corporate Growth-Orange County honored him with the creation of The Nick Yocca Award of Distinction and Merit, which has been awarded annually since he received it in its inaugural year.

Nick, a devout Catholic, dearly loved his family and generously donated his time and resources to many worthwhile charitable causes. Nick and Bonnie had been married 53 years when Bonnie passed away in 2008. Nick is survived by his brother John A. Yocca (wife, Helen) of Pittsburgh, PA; his sister Josephine Markferding of Johnstown, PA; his son Nicholas J. Yocca (wife, Elsa); his daughter Kathleen Y. Coleman (husband, Joseph); his son John M. Yocca (wife, Laurel); and his son Mark W. Yocca (wife, Christine); all of Dana Point. Nick is also survived by his ten grandchildren: Nicholas G. and Maria Yocca; Matthew and Julianna Coleman; Kelly Campbell (husband, Cody), Michael and Andrew Yocca; and James, Christopher and Marisa Yocca; and one great-grandson, Jacob Campbell.

A vigil will take place Wednesday, October 28, at 7:00 p.m. at the O’Connor Laguna Hills Mortuary, 25301 Alicia Parkway, Laguna Hills, and a Mass of Christian Burial will be held on Thursday, October 29, at 11:00 a.m. at St. Edward the Confessor Catholic Church, 33926 Calle La Primavera, Dana Point.