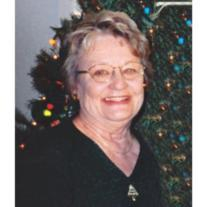 Neva Belle Andreoli, 79, of Lake Forest, CA died April 9, 2012 in the comfort of her home, surrounded by loved ones.

Neva was born July 4, 1932, on a small farm in North Eastern Kansas to Hilda and Edward Luebken. As a young girl her family moved to Nebraska where she grew up with four sisters, Ruth, Carol, Lylah and Sharon. After graduating from high school she became a teacher. On June 1st, 1953 she married Robert Dailey and moved to California. After having her three adoring children, Patrick, Michael and Susan, she divorced and became a waitress for twenty-two years at Knott’s Berry Farm Chicken Dinner Restaurant. During that time she met the “love of her life,” Andy Andreoli, and was married July 5th, 1970. Neva was an avid gardener and enjoyed caring for her roses, but her greatest pleasure was being Grandma. She loved listening to Willie Nelson, dancing and had a great sense of humor.

We have lost someone very special to all of us, she will be dearly missed.

In lieu of flowers, the family is requesting a donation be made in her behalf to: St. Joseph’s Hospital Foundation/Hospice, 1845 W. Orangewood, Suite 100A, Orange, CA 92868.