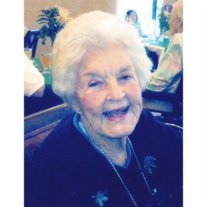 Fischer, Nellie Gray (Gray), born November 23, 1913, in Riverside, California, to Silas Wright and Theresa Jacqueline Gray, peacefully passed away in San Juan Capistrano on May 1. 2013, at the age of 99. Nellie attended high school and city college in Riverside and is predeceased by her two brothers, Sidney and Jim, and her sister, Mary.

In 1934, Nellie married Charles (Chuck) Fischer, an Air Force officer stationed at March Field near Riverside, and they began an exciting life of world travel, adventure, successful business endeavors, and community involvement that spanned 64 years, until Chuck’s passing in 2000. While flying for the Royal Air Force in Canada, Pearl Harbor was attacked and her husband rejoined the US Army Air Force, as it was known in 1941, and they relocated to Miami, Florida, where Nellie’s son Charles Jr. (“Chick”) was born in 1942. During this time her husband was ferrying bombers to Africa and Russia. Because her husband was an Air Force officer, as well as an airline captain for Braniff and Pan American, the Fischers lived in many locations throughout the US and Canada. While living in Dallas, Nellie was an exclusive print and runway model for Neiman-Marcus. When her husband was the chief test pilot for America’s first jet at Norton Air Field in California, she became the first woman in the world to fly in a jet plane. After the war, they moved to Los Angeles where her husband was an executive at a large aviation company. Here they became friends with many Hollywood celebrities who often flew with them to wilderness and vacation retreats. In 1947, the Fischer family adopted a second son, Steven (who passed away in 2006). In 1954, they semi-retired and bought a cattle ranch in central California where they lived for several years before moving to Orange County in 1957. In the early 70ies, they moved to the San Francisco Bay area to be close to their son, Charles Jr., and then back to Orange County in the mid 80ies. Throughout their marriage they moved an unbelievable 55 times!

Nellie loved the arts and was a pianist as well as an avid painter and a long time member of the Torana Art League. As gourmet cook, accomplished interior decorator, and skilled horticulturist, she was the quintessential homemaker, wife and mother. Nellie was also a terrific athlete, and loved the outdoors and enjoyed swimming, tennis (she was an “A” player and the winner of many trophies), skiing, horseback riding as well as many other sports. A student of history, she had been a docent at the Bowers Museum, and, most notably, the author of two genealogy books, tracing her Scottish family history back to the Battle of Hastings (1066). She was a member of the Daughters of the American Revolution (DAR) and various historical societies. Nellie was always an involved member of her community (wherever she lived!) and was active in many clubs, charities, and associations. Her friends and family will remember her fun-loving mischievousness, her great sense of humor, her love of travel and new experiences, and her warm, considerate personality and love of people.

Nellie is survived by her eldest son, Dr. Charles Fischer, her daughter-in law, Denise, and her only granddaughter, Aubrey, of Coto de Caza, and her four nieces and four nephews.
Nellie radiated love, optimism, and spirit. Her generosity and compassion touched everyone. The support she gave to her family seemed endless and it will never be forgotten. Nellie was truly a unique human being and was loved by everyone who knew her.

In celebration of her wonderful life, a memorial service will be held at the O’Connor Mortuary Chapel (25301 Alicia Parkway, Laguna Hills 92653) on Friday, May 24, 2013, at 1 p.m. The family respectfully requests, in lieu of flowers, an optional donation be made on Nellie’s behalf to the Alzheimer’s Association of Orange County.