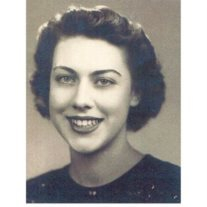 Nellie married Hilding Emanuel Karlsson/Almquist on November 22, 1942 in Chicago, Illinois. Nellie and Hilding lived in the Chicago area until 1947 at which time they moved to the San Fernando Valley, initially in the Burbank / Toluca Lake area and later to Northridge in 1951, where they raised their three sons. The beauty of the orange groves and the beautiful weather gave them much delight.

The family’s love of the outdoors took them on many summer vacations, camping in the Sierra Nevada mountains. Upon retirement, Nellie and Hilding traveled extensively. They loved their trips to Sweden to visit relatives as well as entertaining the Swedish relatives in their beloved California. Their love of travel took them throughout United States including Hawaii and Alaska, several European countries along with ocean cruises.

Nellie’s greatest joy was spending time with her family. She was very proud of her three sons; Glenn, Russell and Gordon. As her family grew, she was a loving, attentive Grandmother to Lisa, Lauren, Andrew, Grant and Britt. Nellie loved playing board and card games, taking trips to Solvang and swimming in the pool with her grandchildren – always with great enthusiasm and laughter. Later in life she was blessed to be a Great-Grandmother to Dyllan, Ojeni and Tsoline.

Nellie was never one to sit still and let life pass her by, always moving with the times and curious about the world around her. Nellie and Hilding (who passed away in 2005) were life long members of the VASA Order of America and their beloved Mayflower Lodge. Nellie served in many capacities and was always willing to help out where ever she was needed.

She loved sharing her life with others and continued being a caring, loving woman with grace and integrity throughout her entire life. A life well lived; rich with family and friends. We will miss her dearly but are comforted to know she is reunited with her husband Hilding and her parents in eternal peace.

Nellie passed away January 13th. God Bless you Nellie for being the best mother, grandmother, great-grandmother and friend. You will always be in our hearts and memories.