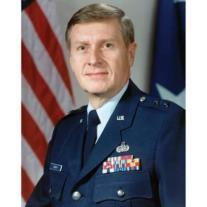 General Lindsay’s Air Force career spanned 34 years (1959-1993). During his career, he was key to the development of the Titan rocket family and played a huge role in launching and deploying numerous classified satellites that are critical to our nation’s defense. He served as Mission Director for X Space Shuttle missions for the Department of Defense. He commanded the Eastern Space and Missile Center at Patrick Air Force Base, FL and thereafter was appointed Director of Special Projects, Office of the Secretary of the Air Force.

After retiring from the Air Force, he worked for Lockheed Martin for 7 years, where he was Vice President of Mission Success in Denver, Colorado, and led the development of the Atlas 5 rocket.

His faith was very much a part of every aspect of his life. He lived it out with integrity and honesty–in the way he handled people, the way he did business, the decisions he made, the way he loved and treated his wife and family, and in how he lived his life every day. He was very active in the many churches he attended throughout his life.

He would say his accomplishments; awards, titles and positions did not define him but rather the love of his family, friends, and those around him. He loved being a husband, father, and grandfather. He enjoyed the mountains, the ocean, fishing, walking/hiking, the outdoors, and loved whales, birds, and all wildlife (except squirrels).

There will be a funeral service at South Shores Church, Dana Point, CA on Sunday, May 31, 2015 at 2:00 pm and a memorial service at Rockland Community Church, Golden, CO on June 7, 2015 at 2:00 pm. His final resting place will be at Arlington National Cemetery, Fort Myer, Virginia. In lieu of flowers, we ask that donations be made to the following to help cure this horrible disease:

Alzheimer’s Association Orange County Chapter
To donate online, use this link: https://act.alz.org/site/Donation2?df_id=20723&20723.donation=form1. To write a check, please make it payable to AAOC and mail to 2515 McCabe Way, Irvine, CA 92614. Please designate your donation for research and state ‘In Memory of Nathan Lindsay’.

Although he is greatly missed by those who were fortunate enough to have known him, it comforts us to know he is with his Lord now.