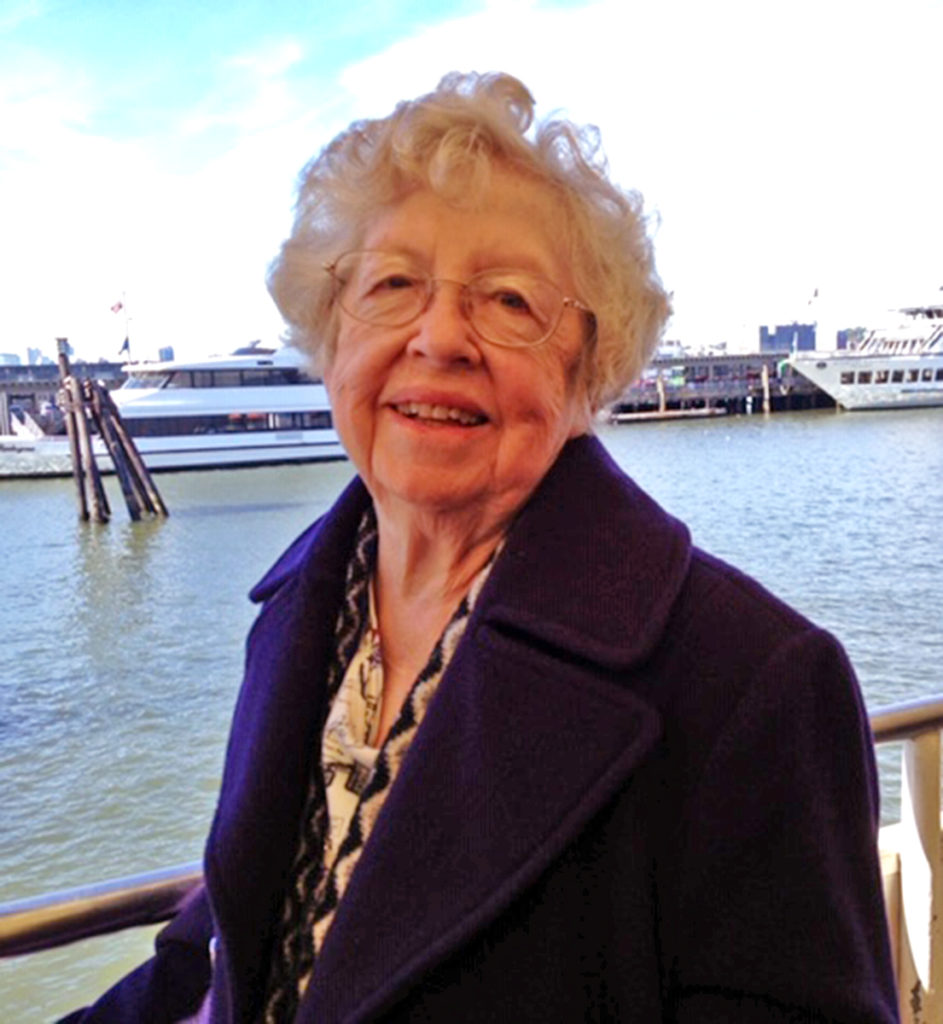 Nancy Lee Mecartney passed away peacefully as a result of congestive heart failure on February 1, 2020 in Irvine, California, surrounded by her family. Nancy was born in Ferndale, Washington on September 16, 1924.  She was the youngest of the four children of Jesse and Alma Wells. She was preceded in death by her husband John Mecartney and her siblings Audrey Owsley, Helen Durkin and Jay Wells.

Nancy graduated from Ferndale High School in 1942 and Seattle Pacific College in 1946 where she majored in psychology.  She started her career on the wards at the Steilacoom State Hospital in Washington then moved to Chicago to work as a psychiatric social worker, living with her good college friends Fran and Ardelle.  She met a young minister, John Mecartney, at a peace meeting in Chicago.  After their first meeting, John told his roommate, “I’ve met the girl I’m going to marry.”  Nancy had been accepted into Smith College where she planned to get her Master’s degree in social work but after a 6-month courtship she married John on September 17, 1951 and became a minister’s wife.  John served several Methodist churches in Wisconsin for a dozen years, where they welcomed four daughters, Mary, Martha, Susan and Crystal.  Before Crystal’s birth John decided to go to graduate school to get his PhD in sociology at Northwestern University and Nancy ran the household and took care of the children while he was at school. They then moved to Albion, Michigan where John taught at Albion College for 3 years.  Nancy went to work part time as a teacher in 1966.  She soon returned to school to get her teaching credential to begin her rewarding career as a full time elementary school teacher.

The family moved to Bluffton, Ohio in 1967 where John taught sociology at Bluffton College and Nancy taught 5th  grade at Edison Elementary School in Lima, Ohio. She deliberately chose an urban school where the need for good teachers was the greatest. In 1978 John, Nancy, Susan and Crystal moved to Detroit, Michigan where Nancy taught students at Precious Blood and Jesu grade schools.    Nancy retired from teaching in 1990.

Nancy and John were very active members of Detroit Metropolitan United Methodist Church where Nancy helped run the Good Samaritan program for the homeless.  She also volunteered weekly with the Detroit Institute of Arts. She was very close to her family and made trips back to Ferndale every summer to visit her sisters and their families.  She also enjoyed spending time in California with her grandchildren, Maria, Erica and Iris, and, in more recent years, with her great grandchildren, Ian, Eros, Kaiya and Clara May.

Nancy enjoyed traveling after she retired. She helped take care of her granddaughter Iris while Martha went to conferences. She enjoyed many trips as Iris’ care provider, including to Germany and Australia. Her last trip abroad was to England and Scotland when she was 87.

After John was diagnosed with Alzheimer’s, John and Nancy moved from Detroit to the Chelsea Retirement Community in 2002.  John passed away on their 53rd  wedding anniversary 9/17/2004.  Nancy continued to be an active member of CRC, living in her own independent apartment until she decided that it was time for a change.  Fulfilling her lifetime dream of returning to the West Coast, she moved to Irvine, California in December 2017, to live with Martha and her husband Lyle and be nearer her grandchildren and great grandchildren.

Everywhere she went, Nancy made lifelong friends.  She was warm, caring, and interested in people. She loved getting together for a cup of coffee at home or sharing a meal at a restaurant.  She enjoyed spending time with family, and watching the children play.  She had a lifelong passion for social justice.  In September 2019, on a last outing before her health started to fail, she met Star Trek actor George Takei in Hollywood with whom she talked about their common interest in the great injustice of the U.S. internment of Japanese Americans during WW II.

A memorial service is planned for early summer in her home state of Washington. In lieu of flowers, donations in Nancy’s memory may be made to Child Haven International (http://www.childhaven.ca) or to Seattle Pacific University (https://give.spu.edu/sslpage.aspx).