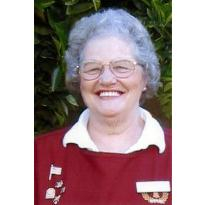 Nancy Ann Dobson Keane was born on December 7, 1933 in Salem, MA to Elmer and Katherine Dobson. She passed away peacefully at home in Mission Viejo, CA on April 1, 2010, with family members at her side, after a long arduous battle with cancer.

She is survived by her loving husband John to whom she has been married for 55 years. She is survived by sons Michael of San Diego, Mark of Cayce SC, Larry of Los Angeles, and daughters Donna Pietsch of Mission Viejo, and Deborah O?Connor of Montclair, VA. She was the proud and loving grandmother of 10 grandchildren.

Nancy was raised in Salem, MA, attended local schools and graduated from Salem High School in 1951. After graduation, she was employed by General Electric as a Comptometer operator. Shortly after graduation she moved with her family to Peabody, MA where she met her husband.

They were married in 1955 and for the next 26 years she was a devoted mother and Marine wife. While accompanying her husband she volunteered for the Navy Relief Society at several Marine bases, and on two occasions became President of the local chapter. For the last 25 years she has been a volunteer in the ER at Mission Regional Medical Center. She is past president of the Volunteer Auxiliary, and at the time of her death was the Chairwoman for the ER volunteers.

Funeral services will be held at St. Kilian Catholic Church on April 10, 2010 at 10:30 AM. She will be interred at Ascension Cemetery in Lake Forest, CA. In lieu of flowers, a donation may be made in her name to either the American Cancer Society or to Mission Hospital Foundation at 27700 Medical Center Rd., Mission Viejo, CA.