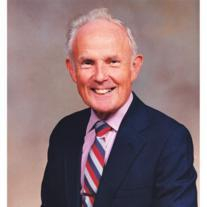 Myles Joseph Kelly was born in Dublin, Ireland on May 13, 1926. In 1956, he and his then fiancée, Pauline, also from Ireland, immigrated to Canada, where they married and their cherished daughter Paula was born. The couple became American citizens and found their way to California.

Myles enjoyed a lengthy career with Ameron International, serving as controller in Hawaii, Holland, and eventually in Brea, California. In retirement Myles devoted himself to serving others. He served on the Board of the Blind Children’s Learning Center in Tustin for many years. As a retired financial executive, he was as an active member of Financial Executives Institute (FEI) where he held various leadership positions and received a prestigious national award for his dedicated service.

An avid tennis player, Myles played up to four times a week before falling ill this year, and he served in multiple leadership roles in his tennis club. He also loved grammar and for over a decade he wrote a humorous column, “Bloopers and Blunders,” for the Casta Courier, a monthly newsletter published by the Casta del Sol community where he resided in Mission Viejo.

Myles will be remembered as a perennial Irish humorist with an outgoing and caring personality. One close friend described Myles as someone who “spoke his mind, (but with an Irish accent)” and who “willingly took on every endeavor required, always bringing humor and enthusiasm everywhere he went.” Most importantly, Myles was a man of deep and abiding faith, a faith he nurtured in his family.