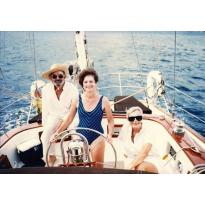 Monnette ‘Lucky’ Sullivan passed away at her home Friday, June 3rd. She was born December 1, 1923 in Warren, OH, the daughter of William Ward & Mildred Grosse Weir.

In 1945 she married Captain William P. ‘Sully’ Sullivan and began an adventure in marriage that lasted 58 years, spanned the globe and brought 5 children and 2 grandchildren. Sully preceded her in death in 2003 while they were living in Honolulu, Hawaii.

A memorial service will be held at Coast Hills Community Church, Aliso Viejo, CA at 11:00 on July 23rd.