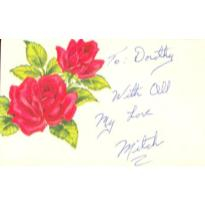 Mitch was a proud Chicago son, but spent the last part of his life as a resident of Mission Viejo, CA. Trading sunshine for snow, he moved to Southern California in 1985, to work as the West Coast sales representative for the Bretford Company, His company charged him with a large sales territory, including Oregon, Washington, Arizona, and Nevada, in addition to California. After retiring in 1995, he enjoyed spending time developing his artistic side by painting ceramic models and carving wood models, which he gave as gifts to his family.

Mitch was a trained draftsman who worked for Cutler-Hammer before embarking on a career at Bretford Manufacturing. He started as a floor supervisor, where his gregarious personality made him a favorite with the manufacturing employees. He worked his way up the ranks to ultimately head sales in the Western U.S. region.

A lifetime Chicago Bears, Cubs, and Blackhawks fan, he enjoyed watching Chicago beat anyone, either on television or at the ball park or Soldier Field. He enjoyed watching in person as Walter Payton captured the career rushing record, and reveled in the success of the 1985 Bears. The Cubs, as we all know, never ceased to break his heart, but he remained ‘cautiously optimistic’ to the end.

Road trips were perfected by Mitch. Long before starting his family, he would travel by car to various parts of the United States. Some of his favorite trips were close by to the Dells of Wisconsin or down to St. Louis Mo. to watch the Cubs in enemy territory. He also drove down to Florida and managed to get into Havana Cuba before Fidel took over. Probably his favorite destination was California, where he ultimately took up residence. He traveled to California several times, each trip an adventure unto itself, often entailing overheating cars, bad motel rooms, and back country roads, all of which served to add to the adventure and enhance the retelling later.

Mitchell was the youngest of five children: the oldest, Theodore, followed by Estelle, Stanley, and Henry who have all predeceased him. Mitch was always particularly close to his sister Estelle, and, subsequently, very close to her daughters Rosanne and Alicia. They were practically his first daughters. He spent a great deal of time with them and continued to enjoy spending time with them as they grew up and started their own families. Most holidays and birthdays were spent with ‘the girls’ and their Mom.

Mitch was definitely the handyman in the family. This was a God-send to his father-in-law who, although he was a sweet man, was all thumbs. This put Mitch in great standing with his future father-in-law. There really wasn’t much that Mitch couldn’t fix. Whether it was toys or household appliances, he always managed to figure out how things ‘ticked’ and to track down and fix the problem.

Mitch married Dorothy Schultz in April 1958, after meeting her on a blind date while participating in one of his favorite recreational passions – bowling. They lived in Chicago for a short time until they moved to the suburb of Des Plaines to raise their children.

Mitch is survived by his wife of over 50 years, Dorothy, and his two children, Chris and John. He is also survived by his large extended family, who will fondly remember him as a big tease with a great sense of humor, with a magical way of appealing to small children.

A memorial service will be held at a future date in Chicago at St. Adalbert’s cemetery.