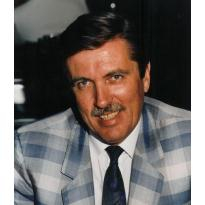 STANDIFER, Milton C., 65, passed away on December 19, 2007 at home in Laguna Niguel, California. Milton, known by family and friends as ‘Stan,’ was a U.S. Army veteran who served during the Korean War. As a businessman, he was successful in the international marble and granite trade, and remains well known in the industry today. Whether traveling the world, or enjoying his family and friends, Stan savored life to the fullest. He will be greatly missed by his wife, Norma; sons, James Battaglia and Terrance Standifer; daughter, Kim Twombley; and seven grandchildren. He is also survived by his mother, Flavia; brother, Jim; sister, Ginger; and numerous aunts and cousins. Services will be held at 1:00 PM on Thursday, December 27th at O’Connor Mortuary, 25301 Alicia Parkway, Laguna Hills, CA, 92653. In lieu of flowers, donations may be made to the American Cancer Society.