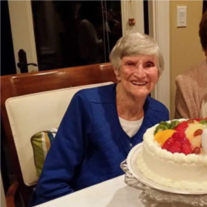 As a teen in Revere, Mass, Millie was a “whiz at skating” where she met her husband
of 61 years. After a few years of marriage, they moved to Southern California and settled in El Toro. She worked 15 years as a retail clerk for ThriftyMart. She was a loyal wife, devoted mother, caring aunt, wonderful neighborhood friend, and Mammy to “framily,”
and Grammie to her grandchildren and great grandchildren.

In the 1990s she accompanied her husband Richard throughout California/USA while
he was the State Commander of the VFW. In later years she played bingo and knitted hundreds of slippers for holidays/birthdays.

While she wished to be remembered as the ‘Slipper Lady’ her family will recount
her as the rock that bound the family. Her home and heart were always open and she always made time to listen–so patient, kind and generous. Millie will be cherished and missed by all.

Mildred is survived by
three children and their spouses: James/ Leslie, Craig/Jennifer, Robyn/Rowena; 8 grandchildren and five great grandchildren.
Mildred was preceded in death by her husband Richard Robert Pignone in July 2009.

Donations in her memory may be sent to Saddleback Memorial Foundation, ALS Association and KidSingers. A family viewing will take place Wednesday, December
28, 2016 from 7:00-9:00pm at O’Connor Mortuary, 25301 Alicia Parkway, Laguna Hills, CA 92653. The Funeral Service will be Thursday, December 29, 2016 at 10:00am also at O’Connor Mortuary immediately followed by interment at Riverside National Cemetery at
2:01pm.(Please bring your Millie slippers to don while at the funeral service.) O’Connor Mortuary, Directors (949) 581-4300.