Mildred Louise Loewen died of cancer on August 30, 2018.  Known to everyone her entire life as Louise, she was born Louise Husk in Farmersville, Texas on April 9, 1923.  She was really a native Californian since her parents lived in Santa Ana, California at the time she was born, and Louise lived in every part of California during her 95 years.  The boys at Jordan High admired the pretty Louise before she graduated there the year that WW II broke out.  In the early part of the war, Louise lived with her sister, Erma, in San Francisco.  The sisters rode the cable cars to their low-paying jobs, and they had fun dancing at the USO with servicemen heading off to war.  Louise was engaged to a sailor she met in San Francisco, but she broke it off when she met Ted Loewen, her soulmate, who was a naturalized American who had immigrated as a child from Canada to Chicago. Ted and Louise were married just before Ted shipped out for Europe in the infantry.  Louise made sure she was pregnant before he left because she was pretty sure Ted would not return, but Ted made it back home in 1946 to find a bouncing boy named Teddy, what else?

Ted and Louise began married life in Bakersfield, and they soon had a second son, Bobby.  Louise was an excellent mother because that’s what she wanted to be.  Following a brief interruption when Ted was recalled to service for the Korean war, the couple decided to move to the San Francisco Bay Area.  First, they lived in Pleasant Hill and then Walnut Creek.  While raising their children in the Bay Area, Ted and Louise’s home was the house where all the kids came to hang out.  Louise went out of her way to make kids feel comfortable in her house, not by indulging them” she had rules” but by loving them and respecting them.  One regular teenaged visitor to Louise’s house in those days called Louise the “Universal Mother”.  And she was.

After Teddy and Bobby left home to start their own lives, Louise went to work at Peralta Hospital, where she worked in admissions for many years.  Ted and Louise lived in Lafayette in those days.  After retirement from Peralta, Ted and Louise returned to Orange County, where Louise grew up, to be near their grandchildren.  There she lived the remainder of her life” nearly 30 years.

Louise leaves her two sons, Ted and Bob Loewen, and two daughters in law, Sung Sook Loewen and Jacinta Loewen.  The marriages of Ted and Sung and Bob and Jacinta have both continued for 40+ years, which is a statement to the example set by Louise and Ted.  Louise has six grandchildren, four of whom are still living.  The four living grandchildren are Sora Javier, Kim Bohy, Todd Loewen, and Brittany Loewen.  She also leaves two great-grandchildren, Otis Bohy (age 2) and Lucy Louise Bohy (6 months).  Louise has been a teacher and inspiration to her children and grandchildren.

Best remembered for her talent for nurturing children and those in need, Louise Loewen was well loved by family members and many others to whom she had no relation at all.  Louise had a knack for noticing people who were left out by others, and she befriended them.  If economic necessity forced parents to turn their child into a latch-key kid, Louise would offer to babysit for free and become a substitute grandma for someone who otherwise would have been very lonely after school.  If a young nephew was left out of a game by the older kids, Louise was always the one who noticed, scooped up the young one, and found something more fun for the youngster to do while basking in Aunt Louise’s love.  Even adults could ask her for advice, knowing she would nurture them without judging.  When Ted was stricken by the ravages of Alzheimer’s Disease, Louise insisted on caring for him far beyond what most people would do until it was physically impossible for her to carry on.

Louise has been nurturing children and adults for 95 years.  Her gifts run deep and are rare.  She will be missed. 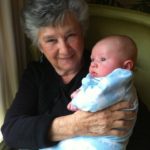