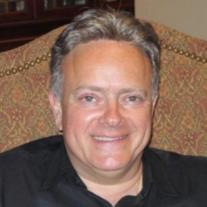 Mike was called to the Lord’s side on Sunday, May 20, 2012 at 2:05 a.m. at Mission Hospital in Mission Viejo, California surrounded by loving family and friends after a courageous battle with soft tissue sarcoma cancer. He is survived by his wife, daughter, son, and two sisters.

Born Sunday, November 14, 1954 in Erie, Pennsylvania, he was the son of Michaelina and Mike Dalessio who were originally from Marchenese, Italy and preceded him in death. He was the brother of Marguerite Miller (Rodney), his older sister, and Anna Iverson (Charles), his younger sister.

He graduated from Strong Vincent High School in 1972 and received his B.S. in Management from the Pepperdine University School of Business and Management on December 15, 1984. Mike went on to earn his California Real Estate License in 2002 and his California Insurance Licenses in 2009. He was the Business Development Director at AWA Collections in Orange, California for the past 3 years.

On November 27, 1987, he married the love of his life, Diane Marie Bagdasar. Together, they raised two children. Megan Danielle Dalessio graduated from the University of California, Berkeley on May 12, 2012 and Jack Ryan Dalessio currently attends Tesoro High School in Las Flores, CA.

An active member of the parish congregation at San Francisco Solano, Mike was an enthusiastic participant in Christ Renews His Parish Retreats, a lector, a regular at the Friday Morning Men’s Fellowship, and co-emcee of the 2011 SFS Fiesta. He and his son, Jack ushered for many years and he and his daughter, Megan, took several house-building trips to northern Mexico with CorazÃ³n. As a way of sharing his professional skills, he hosted a résumé-writing night for parishioners and presented a money management workshop to the parish youth group.

Mike’s loved ones will always remember him as a kind, generous, and fun-loving man. He was passionate about music and enjoyed playing guitar and keyboard. He was the drummer for the bands Sans Culotte and Made in America. He loved to travel and visited the local desert and mountains, Hawaii, New York, Mexico, Canada, France, and Italy three times with his friends and family. A baseball fan, Mike alternately rooted on the New York Yankees and Los Angeles Angels of Anaheim- an expression of his bi-coastal life. Mike was also a talented writer, master of jokes and nicknames, and a wonderful story teller. His family and many friends will miss him dearly as he brought joy, laughter, and ultimately courage and inspiration to all the lives he touched.