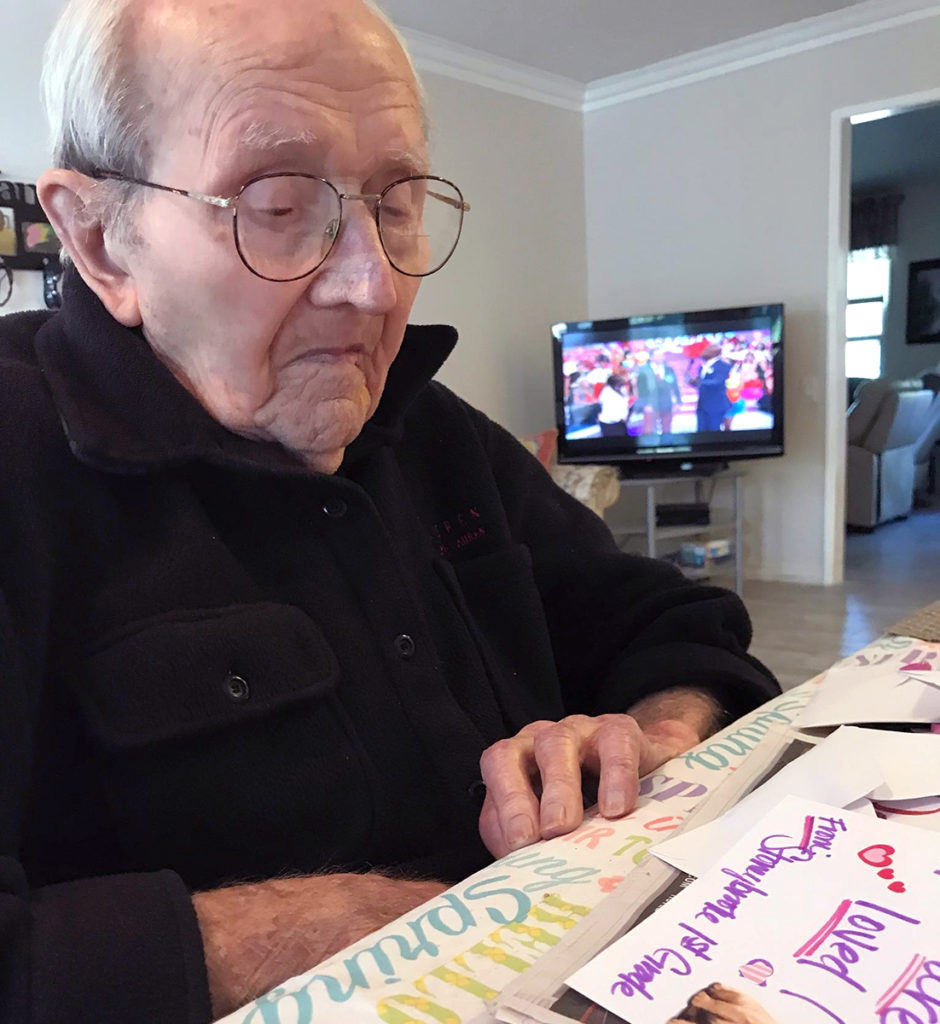 Mike Fedorsin was born November 22, 1916, to parents of Austrian descent, in Southwestern Pennsylvania. He came from a large family of nine sisters and one brother. With more women than men in the family, there was always somebody working to keep Mike in line. Mike’s Mother made sure that he was at Sunday mass, made his sacraments, and participated in Church activities. One of the activities he participated in was taking the basket of home-baked bread to Sunday Mass, and the basket full of goodies at Easter for special blessings. Petty crime was common place in the small coal-mining town where he was raised, so while Mike was at Church, many of his friends were in the streets up to ‘no good’. Mike recalled that his Catholic upbringing during these years is what helped him stay on the path of the ‘straight and narrow’.

His parents died when Mike was just 16, within a month of one another (one on his birthday, the other during Christmas week). Life was harsh during the early 1900’s and as he was now the eldest male in the large family, he was forced to drop out of school and go to work to help support his siblings. He worked in the coal mine during his teen years, then at the steel mill during his twenties. Mike enjoyed telling the story about his first job which was to carry the canary into the mine each day to test the oxygen quality for safety before the miners went further into tunnels of coal. If the canary survived, it was safe for the miners to go in.

As a young man, Mike enjoyed gambling, horse races, pool halls, and a good poker game. He and his younger brother owned pool halls in Youngstown, Ohio. It was during this time that he earned enough money to purchase his first automobile which would take him across country to California. In 1949, Mike took his first California job at Kaiser Steel. Mike’s career took him to Douglas Aircraft where he worked as a machinist for 30 years. He enjoyed working with his hands as well as overseeing a staff of machinists. When not building airplanes, Mike liked to garden, work on his car, build and repair things around the house.

Mike met his wife, Alma, during the early 50’s and they would be married for 62 years. (Alma passed away in 2014.) The couple had two children, John and Deneece. As a husband and Father, Mike shared that his greatest joys were his wife, children, and grandson Walt. During these years, he enjoyed Alma’s large family who lived nearby. As he had spent much time with sisters during his early life, he enjoyed the companionship of his brothers-in-law during the years the couple raised their family. The men would attend Catholic retreats together.

Retirement years took the couple to Arizona where they spent 16 years together, again, close to her family who was also celebrating retirement. Sunday mass and meals together were part of their routine. Mike and his brothers-in-law continued their work as trades and handymen, and often times would help neighboring parishioners and widows with repair projects on their homes. One of his favorite past times was teaching his grandson to swim and spending desert afternoons at the pool.

One by one, family members passed away, and the couple moved to Las Vegas where, again, they spent 16 years. Here, they enjoyed Casino and Las Vegas show life together. The couple relocated back to Southern California (Laguna Woods) when Mike was 94 years old. He would go on to ask, “What the heck are we doing living amongst all these old people?”

Even though life became a little quieter with less activity, and fewer familiar faces, Mike remained young at heart. He never lost his zest for life, staying current with events of the day, tinkering with anything that needed repair, and ready to tell stories to anybody who would listen about his early life.

Mike is survived by his son John, daughter in law Laurie, daughter Deneece, and grandson Walt, as wells as several nieces, nephews, great nieces and nephews, and ‘younger’ friends. His strong will and determination kept his body strong and mind clear, while his faith in the Lord kept his spirit alive. On his final day, he enjoyed the morning paper with a cup of coffee, conversation with his caregivers, and a final prayer with a friend.