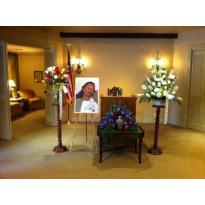 Michael Christopher Presley, known to all as Chris, was born on March 15, 1968 in Oklahoma City, OK. When Chris was a baby his parents relocated to San Clemente, CA. After his parents divorced, Chris grew up with his Mom, brother and sister in San Clemente, San Juan Capistrano and Mission Viejo. He attended Mission Viejo High School and started working at Vacation Resorts International before graduating. He spent the next 24 years working his way up the corporate ladder in the IT department. For the last two years he was self-employed, still in the IT field.

Chris met his wife Jenni in 1995 on a business trip to London, England. They married in Dana Point, CA in April 1996. Their first son, C.J. was born in 1998 and a second son, Caden, followed in 2001. Chris was an active parent, helping at school parties and events, going on Cub Scout and Boy Scout campouts, and umpiring San Clemente Little League baseball games.

Family meant everything to him and he made special efforts to take his family to Lake Tahoe, CA to visit his Dad. Every spring he and his family went to Yosemite for a week and it became a very special place for him. To his family Chris was quiet but attentive, kind and thoughtful, funny and intelligent. He was very generous with his time and in his actions to his family and friends.

Those who loved and survive Chris are his wife, Jenni; his sons, C.J. and Caden; his mother, Juanita; his father, Michael; his brother Craig and his wife, Bev; his sister Stacey and her husband, Chris; and his sister Regina. His nieces and nephews are Chuck, Catrina, Cassie, Cori and Chase and his great-niece is Reagan.