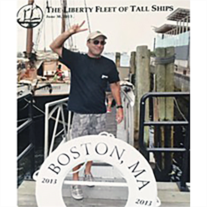 Born in Phoenix, AZ, Michael also lived in Detroit, MI, Red Bluff, CA, Walla Walla, WA and settled in Southern California. Here that he found his passion in life, living on the sea, and an aptitude for working with machinery. A certified Marine Engineer, over the next 25 years he poured himself into working on tall ships, education- at- sea vessels, as well as port engineer on vessels in dry dock.

During this time he also engaged in volunteer work, taking part in multiple relief voyages to Haiti after the Earthquake in 2010. This work also found him aiding in post-hurricane clean up in Honduras and other locations throughout the Caribbean.

In 2012, Michael became the engineer for the Liberty Clipper, based in Boston in summers, and Bahamas in winter. He eventually grew with their fleet and became responsible for multiple vessels. His duties included maintaining the engines and systems, as well as the passengers.

Recently, back on land, he worked as a boat restorer, and as engineer delivering boats from Mexico to San Diego and Los Angeles to Portland. This led to his position as the Marine Engineer at the Long Beach Yacht Club.

While Michael sometimes sailed to a different drum, he lived up to his passion and dreams.

We will return him to the sea, where he has worked, loved and lived for the past 25 years.