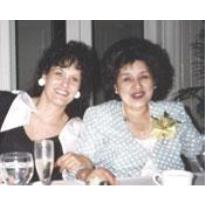 Merridy was born in the Philipines and attended a private Catholic Elementary, Secondary and College. She graduated with a BA in Mass Communications and worked as a reporter in the Philipines and once was blind folded and taken to a rebel camp to get an exclusive interview. She migrated to the U.S. on a travel visa and worked for Freedom Village originally in food service and then activities. She met her husband Frank at Tortilla Flats Restaurant on a blind date and a year later were engaged at the very same restaurant during the fourth of July fireworks extravaganza. The couple married in Honolulu, Hawaii at the rooftop garden of the Moana Surfrider Hotel and honeymooned in Hana Ranch, Maui. Merridy loved the theater, arts and travel and enjoyed making photo albums and scrap books of her many travels and adventures.

After several years of building a nest egg and conquering the travel bug, Merridy and Frank decided it was time to start a family. For several days Merridy complained to her husband about not feeling well in the mornings. The afternoon of this second day Frank took her to a local bookstore and purchased, ‘What To Expect When You’re Expecting.’ and she said, ‘Do you think………? Allison was a blessing in our lives and Merridy glowed everyday for many years. We carried on the tradition of travel, theater and the arts with Allison. Merridy was a wonderful mother, consummate professional at work and devoted wife. She fought a difficult battle with cancer. However, with her strong faith she knew she would be in a better place, free from suffering and pain. Many of us know how lucky we were to have known her, albeit not nearly long enough. Merridy was dearly loved by many will be deeply missed by all, but always remembered.