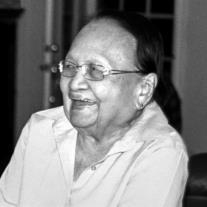 Mercuria was born December 13, 1915,almost 100 years ago in Binmaley, Pangasinan, Philippines. She graduated from Philippine Women’s University as a pharmacist March 22, 1938 and practiced pharmacy for over 30 years in the Philippines. She married Miguel Mamaril on November 28,1941. Together they had seven children Flora, Leticia, Miguel Jr. (Alex), Sonia, Antonia, Manolo, & Blanca. Miguel left the Philippines to start a better life in the United States. Miguel joined Flora who was already in the US. Mercuria stayed in the Philippines with the remaining six children until January 1971, when she joined her husband and brought Antonia, Manolo and Blanca, the three youngest children. The remaining children, Leticia, Alex & Sonia followed a few years later. They settled in Omaha Nebraska.

Mercuria lost her son Manolo on Sep 24,1982. Followed by the loss of her beloved husband Miguel on May 14,1990. These losses were offset by the joy brought to her by her grandchildren – Brian, Leonard, Aimee, Marie, Michael, Robert, Jessica, & Matthew. They in turn gave her great grandchildren – Jackson, Hunter, Lucy, Lenny & Luka who brought great joy & smiles to her life, while she gave them love and cookies. She loved sending gifts and never forgot a birthday. Each grandchild had a favorite special cookie and grandma was always happy to make them a batch when they came to visit.

Mercuria loved her family, baking and gardening and remained very active. She lived alone taking care of herself until early this year, when she was already 99 years old. She was fiercely independent, with an incredible memory right up to the end, correcting people on dates and the fastest street route to get anywhere she had been at least once. She was a human GPS even before smart phones had them.

Mercuria left us on the verge of her one hundredth birthday after a long, happy and productive life.