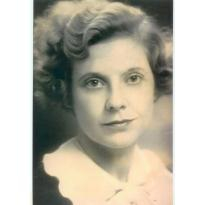 She was born Maxine Elizabeth Coats on August 11th, 1914, in Chicago, Illinois, to Hugh L. Coats and Lenore Marie Rodgers Coats. She grew up in a warm, extended family in Wheaton, Illinois, where she attended Gary Memorial Methodist Church and was proud to be manager and head lifeguard at the Wheaton Community swimming pool.

In 1936, Maxine received a B.A. degree from Grinnell College, Grinnell, Iowa, where she participated in women’s athletics and served as Women’s Editor of the college magazine, The Malteaser. During WWII, she served as a 2nd Lieutenant in the US Marine Corps based in San Diego; her military specialty was Post Exchange Officer. She married Milo Heck in 1942, but was widowed when he died an accidental death just five years later. In 1950, she married Paul C. Lentz and lived with him in Oshkosh, Wisconsin, until they separated in 1957. From that time on, she was an independent woman, making her way in the world with characteristic spirit and determination.

She moved to California and fell in love with the beauty and small-town atmosphere of Glendora in the foothills of the San Gabriel Mountains. She made her home there for the next 40 years, surrounded by her beloved books and Yorkie dogs, reading from her extensive library and swimming in the backyard pool that was her pride and joy. For the first 20 years, she shared her home with her widowed mother, Lenore, and together they hosted many Coats clan visits and gatherings.

Professionally, Maxine was an executive secretary and administrative assistant, famed for her attention to detail and her typing speed of 100+ wpm. Her primary employers were the Ray Ewing Co. and Hoffman LaRoche in Pasadena, CA. She was active in little theater, both as an actress and director, and volunteered her time directing inmates in plays at an area correctional facility. Maxine loved swimming, dogs of all kinds, and birds, but most of all she loved and revered books, and donated countless stacks of them to friends and libraries. She will be especially remembered for her indomitable spirit, her quick tongue, and the thousands of slippers she knit and gave year after year to family, friends, co-workers, shopkeepers, and anyone she heard of who was ill, injured or bereaved.

She was preceded in death by her beloved husband, Milo Heck, her loving parents, Lenore and Hugh L. Coats, her sisters Dorothy Coats Brink and June Coats Rohrs, and her brother David Henry Coats. She is survived by her brother, Hugh L. Coats Jr. of Wayzata, Minnesota, her niece-companions Sunny Coats of California and Suli Rohrs Nee of Alaska, and an extended family of loving nieces and nephews from the Brink, Coats, and Rohrs families.

Maxine was laid to rest beside her parents in Wheaton Cemetery, Wheaton, Illinois, during a graveside family gathering on Thursday, January 4th, 2007. Arrangements were by O’Connor Laguna Hills Mortuary in California and Williams-Kampp Funeral Home in Illinois. In lieu of flowers, the family suggests a contribution to your local library or animal shelter in Maxine’s memory. Condolences may be sent to Hugh L. Coats Jr. at 2103 Hill Road, Wayzata, MN 55391.