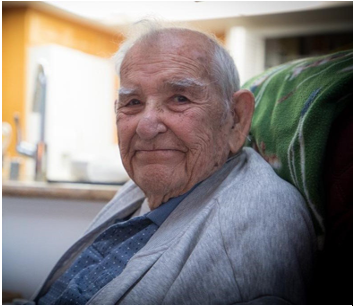 Born May 13, 1925, Max R. Chance passed away peacefully on the afternoon of June 27, 2022, after sustaining an injury he could not recover from.

His is predeceased by his brothers Harvey and A.C. (Spark) and sisters Louise and Leola.

He is survived by his wife of 71 years, Sylvia and his children Valerie, Melinda (Brian), Max Jr. (Paula) and Steven (Carol).

Born in Munday, Texas and raised in Oklahoma Max grew up involved in school, Church, sports, boy scouts, boxing team and all jobs a kid can do. He graduated from Anadarko High School in Oklahoma and in December of 1942 joined the U.S. Navy. He served on a Destroyer Escort in the war zone as a Torpedoman first class until 1946.

After completing a course in air conditioning and refrigeration, he moved to California to be closer to family and to seek employment in that field. That’s when he met his wife Sylvia, and they were married in 1950.  They lived in La Mirada and Whittier before moving to San Juan Capistrano in 1972.

He worked in a printing shop until August of 1952 when He joined the Los Angeles County Sheriff Department.

He worked for the Sheriff’s Department for 30 years and was well known in the law enforcement community for his tenaciousness, investigative ability and leadership.

During this time, he attended college and ultimately, after much hard work, earned a master’s degree and a teaching credential from Pepperdine University in Malibu, California.

After retiring from the Sheriff’s Department, he worked for the Irvine Company and Saddleback College before getting back into investigations with the Orange County District Attorney’s office retiring in 1992 after 10 years with the office.

He did not slow down though, He continued to coach baseball, joined the American Legion, post 721 and was the liaison between the post and the Capo Valley High School baseball program. He became active with the Knights of Columbus at St. Edward’s Church in Dana Point achieving the rank of 4th degree Sir Knight. He was a member of the Capo Valley Rock and Gem Club. He made jewelry and enjoyed his lapidary classes. He was a member of the Elks Club and he and Sylvia were joint presidents of the San Juan Capistrano Seniors Club in 2006.

He enjoyed a life of family, community, fishing, camping, traveling, coaching baseball, watching the kids and grandkids and great grandkids grow and most important, doing all of this, side by side, with his wife Sylvia.