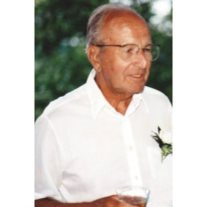 Maurice Stephen Ryan, devoted husband, father and golfer extraordinaire, passed away peacefully in California May 30, 2014. Just a month prior, Maury celebrated his 102nd birthday with his children and grandchildren. He was born in Peabody, Massachusetts the day the Titanic sank in 1912, only son to the late Maurice J. and Mary (Willett) Ryan; he was brother to three beloved sisters, the late Mrs. Chester (Helen Ryan) Swenki of Danvers, Mrs. John (Frances Ryan) Maloney of Beverly, and Mrs. F. Richard (Dorothy Ryan) Bianco also of Beverly. Maury passed away just 29 days after his dear sister Dorothy.

Mr. Ryan was a graduate of Peabody High School, and the Massachusetts Agricultural College Turf School (now the University of Massachusetts) in 1932. He married the love of his life Geraldine Parker on a three-day Army pass and not long after honorably served in WW2 on the European front with both the 7th Armored and Company B 48th Tank Battalions. He returned home to his wife and baby to continue his golf management career at Merrimac Valley Golf Club in Methuen, Massachusetts, where he served as Superintendent of Greens and transformed the club into one of the premier clubs in Massachusetts. He then agreed to take on the 27-hole course at Race Brook Country Club in Orange, Connecticut where he planted over 600 trees, installed fairway irrigation and after nearly 50 years in the business became one of the must respected turf managers in New England. In 1979 he was awarded a Life Membership in the Connecticut Association of Golf Course Superintendents. After retiring in 1979 he returned to work at a local country club in Florida, and finally fully retired at 88. His passion was golf, and aside from being outside on his courses, he and his wife Jerry often enjoyed the game of golf together, as well as many hours relaxing at the beach in Florida, or at and Vermont’s Lake Groton. His only handicap was his golf handicap. He was known as one of the best golfing superintendents in Connecticut having a handicap in the low digits and sometimes simply a one.

Memorial contributions may be made to Seasons Hospice and Palliative Care, 750 The City Drive S, Orange, California 92628.

Funeral Services were held June 3, 2014 at O’Connor Mortuary, 25301 Alicia Parkway, Laguna Hills, California. Maurice will be laid to rest with his beloved wife of 57 years, Geraldine, with a Cryptside Service at Palm Beach Memorial Park Funeral Home, 3691 Seacrest, Lantana, Florida On Tuesday, June 17, 2014 at 10:00am. Expressions of sympathy to the family can be sent to O’Connor Mortuary or Palm Beach Memorial Park Funeral Home. Additional information at www.oconnormortuary.com or palmbeachmemorial.com.