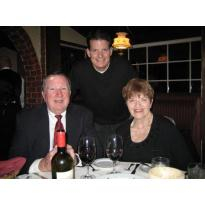 She was born on December 19, 1936 in Chicago, Illinois to the late Thomas and Marion Dunn Brennan. She attended Christ the King Grade School and graduated from The Academy of Our Lady, Long Wood Catholic High School in 1954. Maureen studied nursing at Little Company of Mary/Xavier College and then on September 9, 1961, she was united in marriage to James E. Smith in Chicago.

After marriage, the Smiths moved to Moline, Illinois and later to Davenport, Iowa where they raised their five children. In 1974, they moved the family to Laguna Niguel and Maureen worked as an RN in the trauma unit at Mission Viejo Hospital.

Maureen is survived by her husband, James, her son, James Jr.; her son and his wife, Thomas and Sharon Smith; her daughter and her husband, Patricia and Jack Dickmann; her son and his wife, Daniel and Kimberly Smith; her daughter, Kathleen; five granddaughters, Kaitlin and Meghan Dickmann, Allison Smith, Emily and Noelle Smith; four brothers, James Brennan of New York, NY, Todd Brennan of Chicago, IL, Patrick and Frank Brennan of Naples, FL; two sisters, Kay Pollard and Sheila Cleary of Chicago, IL. She is further survived by nieces, nephews, other relatives, and many friends.

In lieu of flowers, a memorial funds have been established in Maureen’s name for Vocational Visions in Mission Viejo http://www.vocationalvisions.org/.