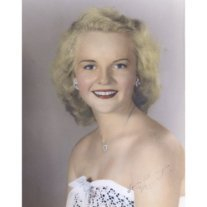 Maureen was born in Philadelphia and passed away at her home in Mission Viejo, California with her husband at her side.

Her parents were Mary Alice (nee Stromberg), originally from Baltimore, and Peter James Cooke, originally from Wexford, Ireland. Maureen spent the first half of her life in the western Philadelphia suburbs of Havertown, Newtown Square and Broomall. She attended Sacred Heart School in Manoa, Pennsylvania, graduated from Notre Dame High School in Rose Valley, Pennsylvania and attended the June McAdams Modeling and Finishing School in Philadelphia.

In 1954 she married the love of her life, James Joseph Coletti. Maureen and Jim raised three children, Mark Anthony (deceased 1996), James Peter of Danville, California, and Gina Helen Huntley (Robert) of Laguna Niguel, California. Maureen was active in the Marple-Newtown community through Boys and Girls Scouts and the Saint Anastasia Church Choir in Newtown Square, Pennsylvania. In 1980 Maureen and Jim relocated to Mission Viejo, California where she was active in fundraising for the Segerstrom Center for the Arts.

Maureen and Jim were fortunate to have traveled extensively in the United States and throughout the world for both business and pleasure. Maureen was a loving and caring person with an effervescent personality. She loved to laugh and have fun. Maureen’s interests were varied and included baking and cooking, coffee klatches with neighbors, entertaining, fashion, home decorating and crafts, music, summers on St. James Place in Ocean City, New Jersey, tennis and travel. Maureen had a lively and strong Catholic faith which sustained her throughout her life.

In addition to her husband and two children, she is also survived by her grandsons Michael and Matthew Huntley of Laguna Niguel, brother Peter Cooke (Janet) of Odessa, Delaware, and many nieces, nephews, cousins and dear friends. She is predeceased by her sister Alice Colgan (Joseph of Berlin, Maryland) and brother Dennis Cooke.

A funeral mass was offered on March 2 at St. Kilian Church in Mission Viejo, California. Rite of Committal with Final Commendation will be celebrated later this month at Saints Peter and Paul Cemetery in Springfield, Pennsylvania. For more information, please contact familyofmaureen@gmail.com

3 responses to Maureen B. Coletti