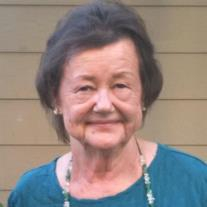 Mary Ann Roubik Hanks, age 74, passed away on June 16, 2015 ending her challenges with multiple illnesses and finally succumbing to her battle with lung cancer.

Mary Ann was born in Milwaukee, Wisconsin on October 11, 1940, the youngest sibling to two older brothers. She is survived by her devoted daughter Debbie, loving granddaughter Megan and her brother Arthur.

After some college in Florida, Mary Ann joined the airlines as a flight attendant, which sparked her love of travel. It was in an airport that she met her future husband as he took her for a spin in his prop plane. They settled in Anchorage, Alaska in 1964 and after a relocation to Northern California, Mary Ann divorced and she and Debbie moved to Virginia Beach before settling into Southern California in 1976. The mom and daughter were inseparable and continued to hold the most amazing bond of not just family, but friendship.

Mary Ann was a strong and tenacious woman, setting the most powerful examples for her daughter as she worked multiple jobs to support Debbie, both financially and emotionally. She also gifted her love of cruising on both Debbie and her family as they have cruised around both the Pacific and Atlantic oceans, and most recently to the islands of the South Pacific and even down to South America and back.

Mary Ann will always be remembered as the doting grandmother of Megan and will be missed by many folks who recognized her regularly zipping around town on her scooter.

Memorial donations would be appreciated at either City of Hope (www.cityofhope.org) or Knots of Love (www.knotsoflove.org).