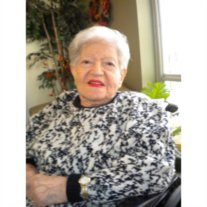 Mary Sclafani was born in New York on November 16, 1917, to Louis and Maria Sclafani, immigrants from Sicily. She grew up in Lower Manhattan with her sister Gussie, and brothers Joe, Charles, and James. Louis was a fisherman, peddling his catch in a push-cart through the streets and alleys to support his family. Mary left school in the 7th grade to work in a sweat shop, sewing clothes to supplement the family income, as many people did during trying those times.

On July 22, 1939 she married Frank Vitale. They lived in South Bronx, and had two children, Dolores and Peter. Mary was a great mother, who would fuss and worry about her children for the rest of her life. She was a wonderful cook, housewife, and impeccable housekeeper with a fiery disposition and an incredible will. She was a strict disciplinarian, her weapon of choice being a wooden spoon, which she used with great skill.

Mary and Frank left the Bronx in the early 60’s and moved to New Jersey, until moving to California in 2001, and lived in Laguna Woods until Frank passed in 2006. Mary is survived by her children, Dolores, Peter, and Helen; grandchildren, Keith, Lisa, Mia, Philip, Roxanne, Vincent, Joe, Julie, Susan, Dennis, Garland, Kerrie, and Melany; and great-grandchildren, Austin, Alexis, Justin, Faith, Ryan and other great-grandchildren in her extended family, whom she dearly loved and considered her own. Mary will be missed and always admired for her tenaciousness, strength and will. God bless you Mom. We pray that you are dancing with Dad.